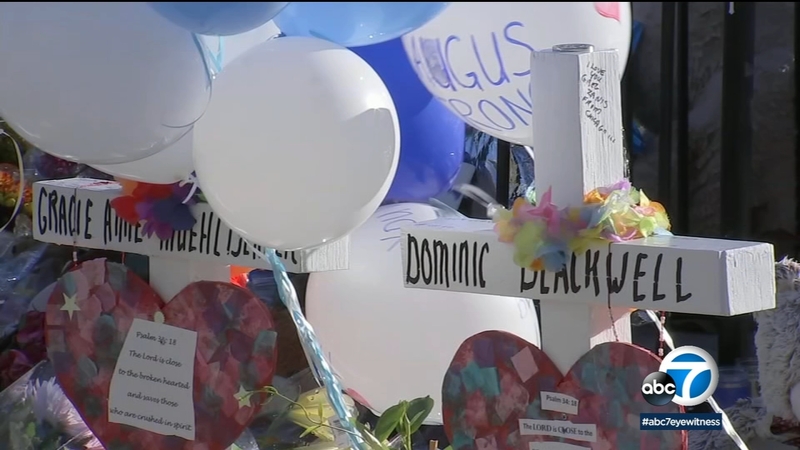 SANTA CLARITA, Calif. (KABC) -- Thousands of people gathered Sunday night in Santa Clarita to mourn and remember the victims of the shooting at Saugus High School.

"My favorite thing about you, Gracie, was how funny you were," said Riley Muehlberger, Gracie's brother. "You were always able to put a smile on my face, and that's one of the many things I'll miss the most."

"I'm going to miss his infectious smile, his sense of humor. It will be a long painful walk to class without him on Dec. 2," a friend said.

Gracie's best friend, Addison, who was wounded in the shooting and is now recovering at home, had a recorded message played for the crowd.

"To my friends and family and my Saugus Strong community, I really appreciate all the love and support. I'm so thankful for each and every one of you," she said.

Speakers praised students and community members for the show of strength even as they grieve.

Two students were killed and three other teens were wounded in the shooting on Nov. 14.

Central Park has become a gathering place for those wishing to remember the victims. Balloons in school colors, flowers, stuffed animals and other items have been left at the park to remember them.

Several thousand people attending a vigil at Central Park in #SantaClarita. The community remembering the victims of the tragedy at Saugus High @ABC7 #SaugusHighShooting pic.twitter.com/kOMmDqOLQT

Saugus High School is expected to remain closed until Dec. 2. Other schools in the district will reopen Monday.

The tragedy has hit many hard throughout the region.

"I have many friends at Saugus High School. It's tragic that this happened here," said Savannah Herrera, a Valencia High student. "We need to stop this because it has a huge impact. We can't be losing lives."

In the meantime, the Los Angeles County Sheriff's Department says it has investigated a number of online threats made against schools in the district. None of the threats are believed to be credible.

Students who were forced to leave items behind during the shooting will be able to retrieve their belongings on campus between 10 a.m. and noon Tuesday.