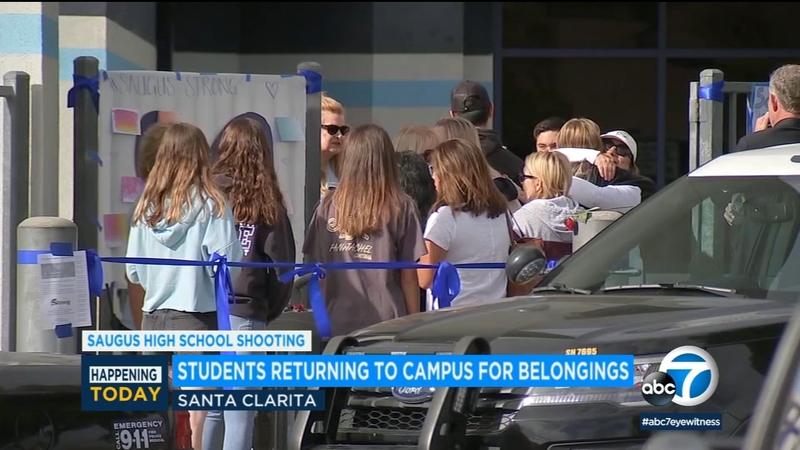 SANTA CLARITA, Calif. (KABC) -- Students of Saugus High School returned to campus briefly on Tuesday for the first time since the shooting that claimed the lives of two students and the gunman and left three others injured.

Students were allowed to access the building for about two hours to retrieve belongings that had been abandoned amid the chaos of Thursday's shooting.

A 16-year-old student, Nathaniel Tennosuke Berhow, pulled a handgun from his backpack and opened fire on classmates in the quad before turning the gun on himself, investigators say.

Two students were killed at the scene and Berhow died the next day from his self-inflicted gunshot to the head. Three other students were wounded.

As students and parents arrived at the school on Tuesday, many left flowers and other items at a memorial outside the school. Students said amid the trauma of the last few days it was good to reconnect with some of their classmates on campus.

"I think I'm just nervous for the kids," said parent Sarah Acosta. "I think they lost a little of their innocence through this whole thing. The fact that they have to look over their shoulder - it just makes me sad and angry. I don't want to leave her side."

Saugus High School is expected to remain closed until Dec. 2, but the 15 other schools in the William S. Hart Union High School District reopened on Monday.

The district is providing counseling, emotional support and other activities at Saugus High School on Wednesday and Thursday.