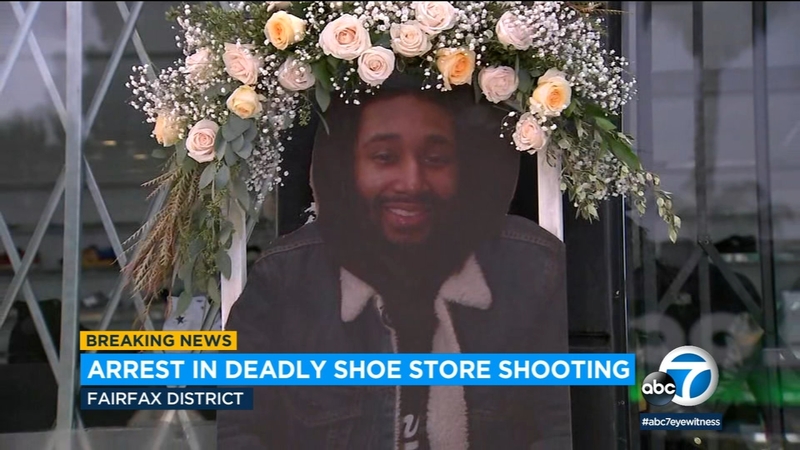 LOS ANGELES (KABC) -- A 16-year-old boy was arrested Thursday in the fatal shooting of a Shoe Palace employee in the Fairfax District, police said.

The shooting happened just before 12:30 p.m. Wednesday near the store, located at Melrose and North Genesee avenues.

A 26-year-old man, identified by loved ones as Jayren Bradford, was shot and taken to a nearby hospital, police said. The LAPD later confirmed he had died.

The suspect fled the scene.

LAPD said they arrested the suspect in the 8100 block of State Street in South Gate around 12:30 p.m. on Thursday.

Witnesses and investigators said the incident started with a dispute over a raffle the store was holding over a pair of sneakers.

"Investigators learned that employees had a conflict with a group of people regarding the shoe raffle. A co-worker telephoned Jayren Bradford and told him about the conflict," LAPD said in a statement. "Bradford, an employee of the Shoe Palace, came to the store to assist co-workers. When he arrived he was confronted by the group and the juvenile pulled out a gun and shot Bradford."

A witness said the employee appeared to be trying to de-escalate the situation and was backing away when he was shot.

Video shot by an eyewitness shows the employee backing into the street away from several people, with several store employees also nearby. The suspect suddenly pulls a gun and fires once. The group then scatters in the other direction as bystanders seek cover.

A sign in the store window indicated the raffle was for a pair of Nike Dunk Low sneakers in Black Multi Camo color scheme.

"Extensive video was recovered and a thorough investigation was completed," LAPD said. "Numerous tips came in from the community on this case and was pivotal in the quick arrest."

The teen shooting suspect's identity is being withheld because of his age.

Loved ones, friends and co-workers of Bradford gathered at the store Thursday night to honor his memory and express their anger and heartbreak over the killing.

Prince Williams, one of Bradford's family members, described him as a polite, kind person who had a passion for music.

"He just finished school, was just starting to get used to the California lifestyle, coming from Colorado as a young 20-year-old," Williams said. "It's just tragic that this happened."