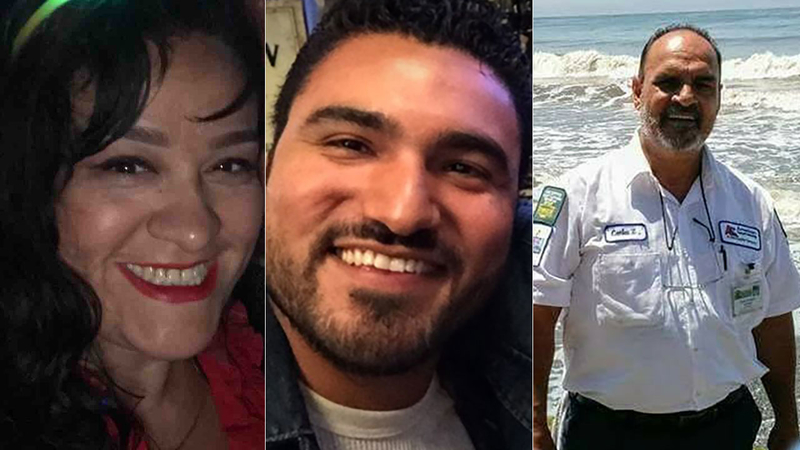 CANOGA PARK, Calif. (KABC) -- Officials have identified three of the four people who were killed in the shooting rampage across the San Fernando Valley Thursday that included the suspect's father and brother.

Gerry Dean Zaragoza is suspected in the killing spree that started early Thursday morning with his own family members in Canoga Park and ended with the fatal shooting of an apparent stranger on a Metro bus in Lake Balboa.

Charges against Zaragoza, who is being held without bail after a 12-hour manhunt, have yet to be announced. He may make his first court appearance Monday.

Besides his own family members, one of the victims was identified as a woman who knew Zaragoza - but wanted nothing to do with him, according to family members.

The string of horrific crimes began at about 2 a.m., when Los Angeles police officers responded to the 21900 block of Roscoe Boulevard for reports of multiple people shot.

The two men were pronounced dead at the scene while his mother was taken to an area hospital and later listed in stable condition, authorities say. Neighbor's say Zaragoza's mother is the property manager of the apartment complex where she was shot.

Zaragoza was also linked to a double shooting at a gas station in North Hollywood around 2:45 a.m.

Police say he shot and killed a female acquaintance, identified as 45-year-old Azucena Lepe, and wounded another man who worked at the station near Vineland Avenue and Vanowen Street.

Relatives of Lepe - who went by Susie - say that Zaragoza had been giving her unwanted attention for more than a year.

"She didn't want anything to do with him," said the victim's brother, Cuco Lepe. "I didn't know about the guy but it turns out he was harassing her for at least a year."

Lepe's cousin says the loss has been hard on the family.

"It was devastating," said Sandra Rosales. "You don't ever want to hear that it happened to someone you love and care about in your family."

One witness reported seeing the wounded male gas station employee screaming and apparently trying to find his cellphone to call for help.

Shortly before 8 a.m., officers responded to a report of an attempted robbery of a victim at a Bank of America ATM at the intersection of Sherman Way and Topanga Canyon Boulevard. No injuries were reported.

Authorities later said Zaragoza was linked to a fourth crime scene in Lake Balboa, where a person was fatally shot on a Metro Orange Line bus located at Victory Boulevard and Woodley Avenue.

A witness said a man walked onto the bus and shot another man in the head. There was no indication of any previous connection between Zaragoza and that victim. Witnesses said there was no interaction or provocation before the shooting.

"He didn't do anything. He was just sitting on the bus," one witness said about the victim.

Zaragoza, who police believe was traveling in a dark-colored Jeep Liberty SUV with paper license plates, was taken into custody near Gault and Canoga in Canoga Park around 2 p.m., the LAPD confirmed.

He put up what was described as a small amount of resistance in his arrest and police used a Taser to subdue him. He was transported from the scene in an ambulance.

He was later booked on multiple felony charges.

Police recovered a gun believed to be similar to the one used in the shooting, but it has yet to be definitively linked with the crimes.

Police said the motives in the shootings are not yet known.

A GoFundMe has been established to help the Zaragoza family, including funeral expenses and the medical bills of the suspect's mother who survived the shooting.