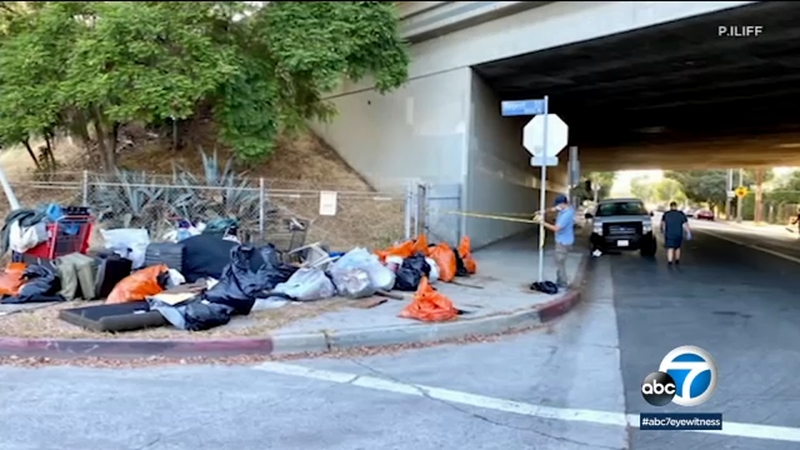 WEST LOS ANGELES (KABC) -- West Los Angeles neighbors in the South Robertson district are defending their installation of boulders to deter homeless people from setting up camp on the sidewalk.

Dozens who claim responsibility for the 60 rocks beneath the 10 Freeway on Cattauragus Avenue say it was their last resort after the City of Los Angeles failed to bring in homeless services.

The neighbors who endorsed the rock project and the South Robertson Neighborhood Council, which was not involved in the installation, have both been lambasted by homeless advocates.

"We are getting death threats but they claim they are compassionate," said one resident who did not want to give her name.

Peter Iliff, screenwriter and resident of the South Robertson area, says that homeless advocates are unaware of neighbors' efforts to provide help and find solutions. Residents say they have offered everything from meals to even housing in one case.

"We offered an apartment - not talking shelter - an apartment. They still refused," says Iliff.

Someone placed dozens of heavy boulders on a West Los Angeles sidewalk under an overpass in an apparent effort to deter homeless encampments.

And the neighbors near the Cattauragus tunnel have cleaned. They collected bag after bag of filth after the last large encampment was recently abandoned.

"We found five jugs of urine, a bag full of meth pipes and oxycontin," says Iliff.

But the encampment became dangerous. The fire department responded regularly to campfires that went out of control. Police arrested a disturbed man with a sharp object who had chased a man out walking with his two toddlers.

"He was he was screaming and using inappropriate words," says the young father who did not want to be identified.

Neighbors investigated the potential purchase of a fire-damaged hotel down the street as a possible housing option if the city would purchase and restore it. They say the city was not interested.

A different opportunity emerged when they saw a landscaping feature under a different freeway bridge on Motor Avenue: boulders were interspersed with agave plants. It became the neighbors inspiration to purchase and install the boulders.

After Cattauragus neighbors decided to replicate it, dozens contributed to a GoFundMe page posted by Iliff.

When homeless advocates learned of the action the Bureau of Street Services swiftly responded with a threat. Iliff would be charged with a felony unless the boulders were removed within 24 hours.

The boulders have since been removed and unhoused people have returned. Neighbors are out of thousands of dollars and frustration has grown.