What's next for Simone Biles after Tokyo Olympics?

Will Biles compete in the Paris Olympics in 2024?
CNNWire
By Theresa Waldrop, CNN 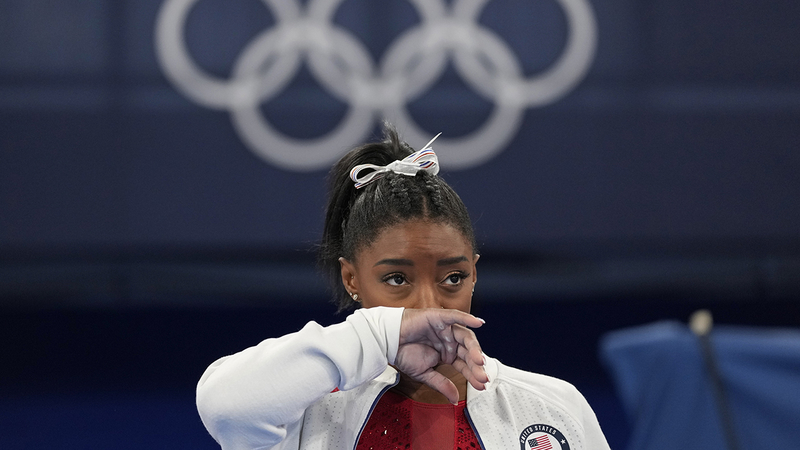 Biles out of vault and uneven bars; beam and floor possible

HOUSTON -- Gymnastics superstar Simone Biles left Tokyo on Wednesday with her fame intact, but changed from the person she had been before the games.

Suffering from the twisties -- a mental condition in which gymnasts lose the sense of where their bodies are in midair -- Biles stunned the world by withdrawing from some Olympics events.

"I had no idea where I was in the air," Biles said in an interview on the "Today" show, speaking of her performance in a team event. "You can literally see it in my eyes in the pictures, like I was petrified."

Biles, who won four gold medals and a bronze in the 2016 Olympics, went on to win bronze on the balance beam in Tokyo, a medal that meant "more than all the golds, because I've pushed through so much the last five years and the last week," she said in a "Today" show interview.

The experience, she said, allowed her to realize that she is "more than my medals in gymnastics. I'm a human being, and I've done some courageous things outside of this sport," she said in the interview.

"I don't think, if this situation didn't happen, I would have never seen it that way," she said.

After four Olympic golds and 19 world championship titles, the 24-year-old has brought about a wider discussion on the mental health challenges facing top-performing athletes, an amazing feat in itself.

What's next for this extraordinary young woman?

Biles' coach, Cecile Canqueteau-Landi, said the star athlete is "openly talking about therapy, and that's what she's going to go through."

"Honestly, I think we all should do it," Canqueteau-Landi told reporters in Tokyo, according to the Dallas Morning News. "No shame on it. I think I might need to. It's been one hell of a week - some very highs, some very lows."

Some much-deserved R&R also looks to be in Biles' future.

She deserves "some vacation," Canqueteau-Landi said, according to People. "I think she needs a good break. We're going to go back to work but I'm happy for her that she gets to go back to her family, her boyfriend, her dog. She's just going to go home and enjoy."

"At the end of the day, people don't understand what we are going through," Biles told reporters.

The Gold Over America Tour

An extended vacation may have to wait until after the Gold Over America Tour that Biles will be starring in starting next month.

She and other star gymnasts, including Laurie Hernandez and Jordan Chiles, will be touring 35 cities throughout the United States to celebrate female athletes.

"I love the sport of gymnastics and wanted to help create a show that celebrates the pure joy of performing," Biles said in announcing the tour.

The first performance will be in Tucscon, Arizona, on September 21, and the last is in Boston on November 7. The schedule and tickets are available here.

Will Biles compete in the Paris Olympics in 2024?

"I just need to process this whole thing first," she said at a news conference in Tokyo when asked that question.

Later, in an interview on the "Today" show, she said she's "keeping the door open" to the Paris games.

Her coaches are French, and Biles in the past has indicated she might compete there to honor them.

Coaching, of course, is another possibility down the line.

"Maybe one day, I have no idea what's going to happen," Biles said on the "Today" show when asked about coaching. "I'm just going to take it day by day."