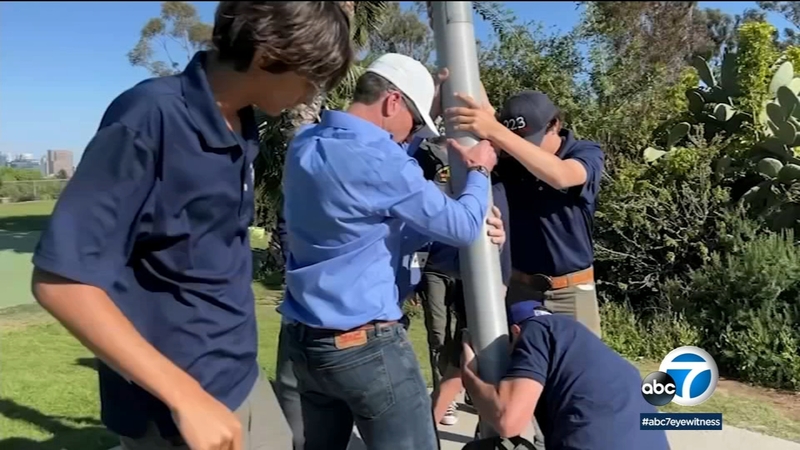 LOS ANGELES, Calif. (KABC) -- Flagpoles originally started as simple pieces of wood. They were a way of showing different territories, nations and military positions -- but over time, flagpoles have been used as a way to show respect.

A new flagpole was installed at Veterans Heroes Golf Course in Los Angeles. It's not just any old pole. It's a pole with nearly 40 years of history.

It once stood on the grounds of the L.A. Coliseum during the 1984 Olympic Games.

Boy Scout Alex Cornell is spearheading the flagpole project that honors veterans like his golf instructor at the course.

"He told me it would be a great idea because he told me the story about how the flagpole had to be replaced with an older one because the original one got bent," Cornell said. "So that really inspired me to take this on as my project."

The 15-year-old helped prepare and attach Old Glory to the pole.

"One thing I really didn't know was how much this meant to the veterans that are here," Cornell said. "Every time I was working on this project, I would have veterans coming up to me thanking me for doing this."

At 101 years old, Paul Ignatius is a walking and talking history book. He grew up in Glendale and served his country in World War II. And that was just his warm up act! He also worked at the Pentagon, and spent two years as Secretary of the Navy. Now, he's sharing his stories with fellow residents.

Once firmly in place at the golf course veterans, Boy Scouts and others joined for the national anthem.

Soon after the 1984 Olympic Games ended, Cornell's family purchased the flagpole and transplanted it to their home. They are elated that it's now at the Heroes Golf Course.

"We had it in our front yard since '84," said Christine Cornell, Alex Cornell's grandmother. "When I heard that Alex as a scout wanted to contribute a flag to the Veterans Administration, I thought it would be a good chance to donate the pole to such a worthy cause."

Veterans felt touched by the gesture.

"When you come and you see Eagle Scout projects like this, and you see how much work and devotion went into it and how special this one is, having a flagpole that was from the Olympics here in Los Angeles, I think it just warms your heart," Veteran Eric Hoffman said.

Duncan Starkenburg used final Eagle Scout Project to support a cause that hits close to home.

Alex hopes the flagpole will be a lasting salute to veterans across the country.

"I know that this will have a lasting impression and they are all very thankful for this," Cornell said.