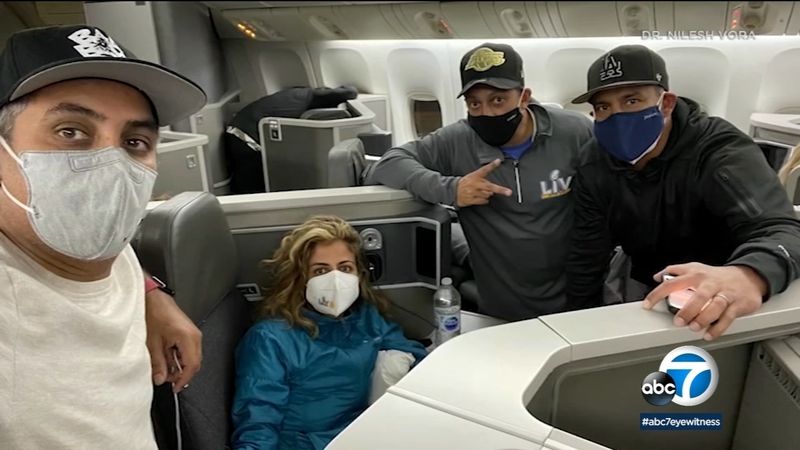 A group of doctors who saved a woman from dying during a flight back to Southern California are sharing their incredible story.

Doctors Salima Thobani, Rhim Govani and Nilesh Vora were some of the health care workers and football fanatics who were honored with a free trip to the Super Bowl. The trio quickly jumped into action when a passenger on their return flight to Los Angeles started having chest pains.

"You shift into survival mode and you start thinking about all the clues that the patients are giving you," said Dr. Vora with the Todd Cancer Institute at Long Beach Medical Center.

The plane made an emergency landing in Houston after Dr. Govani spoke to the pilot and explained that she might not survive the whole flight.

Paramedics rushed the woman to the hospital. Doctors in Houston later sent an X-ray to the team on the plane, showing them they had saved her life from a tension pneumothorax.

"After we saw that X-ray, we knew, you know that pit where you're just like thank God she's okay because she otherwise wouldn't have been," said Dr. Thobani. "And think her time wasn't up so we were there for a reason to get her, almost like vehicles, to get her where she needed to be."

Rams coach Sean McVay sent the group a personal message praising them for their mid-air heroics.

"Thanks so much for being Rams fans, but most importantly, thanks for what you guys do," he said.

The doctors say watching the big football game was amazing but the highlight of their trip was knowing the woman that they helped survived.