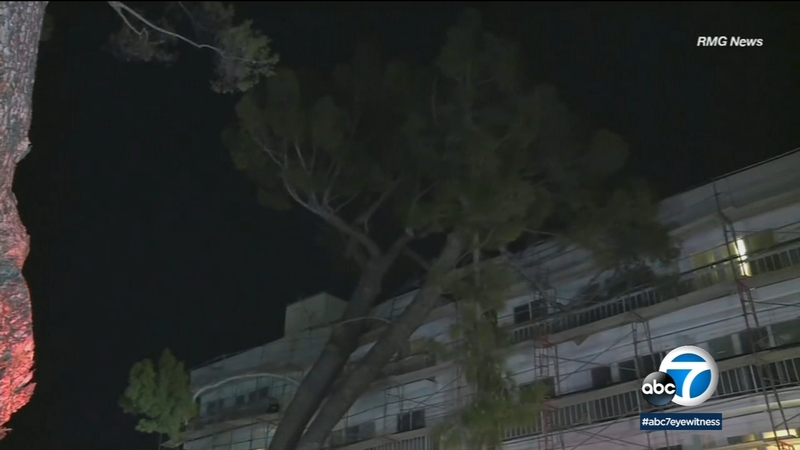 LOS ANGELES (KABC) -- Some 20,000 customers of the Los Angeles Department of Water and Power remained without power Wednesday morning as a widespread outage continued amid high winds and toppled trees across the region.

Power was knocked out for as many as 42,000 customers Tuesday evening, the utility said, prompting overnight responses from crews working to restore service. That number was down to 37,000 by 5 a.m. and fell even further as the morning progressed.

"Our electrical distribution system was hit hard by damaging winds and there are over 15 locations with wires down," LADWP said in a statement, urging residents to be careful near down power lines. "Treat every line as if it is live and call 911."

The blustery conditions brought down a massive tree onto two parked cars in South Los Angeles, where a large branch was protruding into the intersection of McKinley Avenue and 51st Street.

In Palms, a palm tree snapped near its trunk. Its fallen canopy was large enough to block an entire street.
EMBED More News Videos

A massive tree toppled onto the facade of an apartment building in Westwood as strong winds rolled across Southern California.

A towering tree slammed into the facade of an apartment building in Westwood that was undergoing renovations.

At the intersection of San Marino Avenue and Broadway in San Gabriel, Southern California Edison crews worked to repair a power pole that was knocked over amid the blustery conditions.

LADWP customers were advised to plan for 24 hours without power, the agency said, adding that some areas could expect less or more time due to the complexity of repairs.

Customers affected by #LAwind outages peaked at 42,000 overnight and are slowly coming down as crews work. At 5AM, approx 37,000 customers are without power.