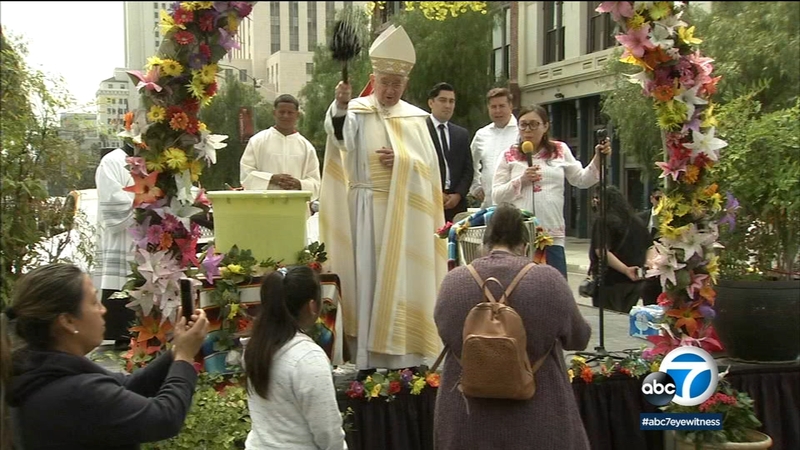 Archbishop Jose Gomez talks being elected president of US bishops

"It's been a very emotional week because I wasn't expecting that, that election in that way. So many of my brother bishops showed that they really wanted a Latino as the president when they elected me, and it was just beautiful," Gomez told Eyewitness News.

Gomez was born in Monterrey, Mexico and speaks highly of his family, and their influence on his faith.

"For me, since I was a child, through the help of my parents and my family and my sisters, and I felt the presence of God in my life," Gomez said.

He's called L.A. home for almost a decade, after serving in Denver and San Antonio. Gomez was ordained in Spain at the age 26, and just finished his term as vice president of the USCCB - evangelism is at the top of his agenda.

"We really want to make the whole world a city of saints," he recently told hundreds attending a youth conference.

Gomez discussed mass shootings, people - including children - battling depression and suicide, and the presence of God in his life.

"I feel that we have lost sense of who we are," he said. "I think what may help all of us is to understand that first and foremost that God cares about me. He loves me, and He's present in my life."

When discussing child sex abuse in the church, he described it as a terrible tragedy, stressing the Catholic Church - including the Archdiocese of Los Angeles - is totally committed to the protection of children, and a zero-tolerance policy regarding the sexual abuse of minors.

Gomez is an author who advocates for undocumented immigrants. And he's a normal person who enjoys ordinary things.

"Obviously, I'm a Lakers fan. I'm a Dodgers fan," he said laughing. "I like to play basketball with the seminarians."

Archbishop Gomez said he wants to be remembered as a disciple of Christ.