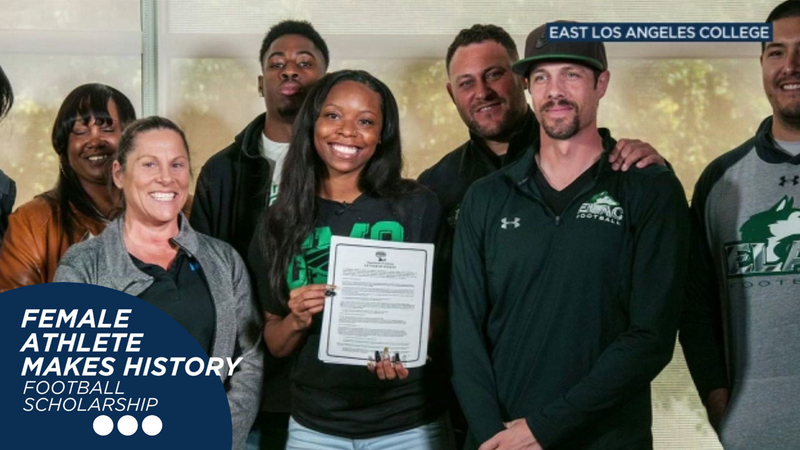 LOS ANGELES (KABC) -- Eyewitness This: Here are the stories to start your day.

East LA female athlete makes history!
Football scholarships are often reserved for men -- but a young woman in East Los Angeles is doing her best to change that.

The 5-foot-7 free safety is heading to Central Methodist University over five other schools. Harris -- who played junior college football at East L.A. -- gained fame after starring in a Super Bowl advertisement for Toyota. She said chose Central Methodist because they had been communicating with her before that ad.

Artist Michele Asselin featured women working in a range of professions at Metro -- from urban planners to mechanics.

She says she hopes Metro riders can experience the portraits and see these faces as guides, guardians and builders for the city. You can tour the exhibit from now until later this fall.

The motion, which was unanimously approved, directs the department to report back with an audit of existing diaper changing stations in men's and women's restrooms on their sites and the feasibility of providing diaper-changing stations in each of their restrooms - regardless of gender.
Report a correction or typo
Related topics:
societyeast los angeleslos angeles countywomen athleteseyewitness thistransportationbabiesfootballbathroommetrolos angeles city councilartchildrenathletesparktrainscollege football
Copyright © 2021 KABC-TV. All Rights Reserved.
More Videos
From CNN Newsource affiliates
TOP STORIES