Surveillance video sent to Eyewitness News showed a female porch pirate taking a package from the front of a home on Dec. 21. Brittany Hale, who submitted the video, said it contained a collage of wedding photos she sent to her parents and grandparents.

She released the video of the theft in the hopes the thief would return the items - no questions asked.

The parents filed a police report after seeing the theft, but did not expect to see the special gifts again.

"We were thinking, you know, being so special that these people were going to just open it...and just throw them in the dumpster," Wayne Torrisi said.

It appeared Hales plea caused the Grinch's heart to grow and the person was shown in a new surveillance video returning the packages on the front doorstep sometime on New Year's Eve.

The family was overwhelmed with gratitude.

"I can't tell her how appreciative I am that she did the right thing in the end and returned it," Lori Torrisi said.
Report a correction or typo
Related topics:
societyrancho santa margaritaorange countychristmas giftnew year's evepackage theftphotos#abc7eyewitnesschristmaswedding
Copyright © 2020 KABC-TV. All Rights Reserved.
RELATED 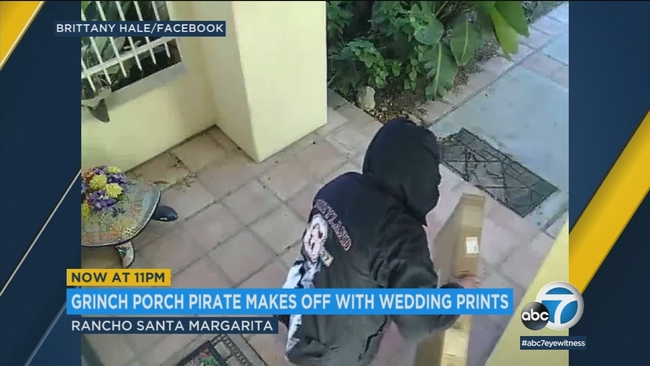