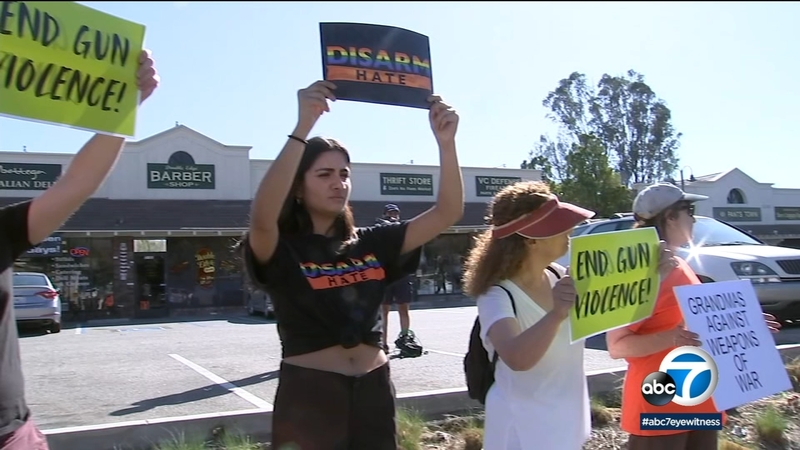 THOUSAND OAKS, Calif. (KABC) -- Nine months since the Borderline Bar and Grill mass shooting in Thousand Oaks, local activists demonstrated outside the city's only gun store Monday in the wake of dual mass shootings in Texas and Ohio.

A sign saying the store was closed for "mental health day (at the range)" was posted on the front window of VC Defense Firearms as activists and others protested.

"I didn't even know we had a gun store here, and the fact that we do just instills a whole new layer of fear in myself, as well as the people in my community," said Kimia Mohebi of Never Again SoCal.

The honking and the signs in favor of restrictive gun laws caught the eye of driver Dale Menagh.

Menagh knows the gun store's owner and believes in the Second Amendment.

"We also believe strongly, if guns are outlawed, only outlaws will have guns," he said.

VC Defense Firearms did not speak to Eyewitness News on camera, but the owner told USA Today after the Borderline shooting that there was an influx of customers buying out of fear and safety.

"The people that are running the business are our neighbors who honestly work hard and pay their taxes," Menagh said.

Gracie Pekrul, who arrived back from a gun violence prevention training in Washington, D.C., offers another perspective.