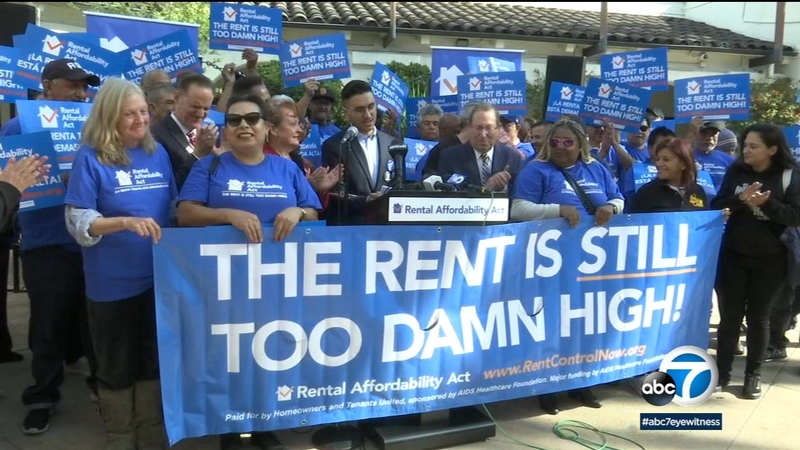 LOS ANGELES (KABC) -- Proponents of rent control are making their case to California voters again after a piece of proposed legislation gained enough signatures to make it on the statewide ballot for next year's election.

"Rent control places sensible limits on how much a landlord can raise the rent. Rent control works and it can be enacted quickly," said René Christian Moya, campaign manager for the Rental Affordability Act, which will allow for the expansion of rent control across the state.

It gained nearly one million signatures, making it eligible to appear before California voters in 2020.

A similar measure, Proposition 10, was defeated by 54% of voters a year ago in the November election. More than 7 million Californians voted against it.

Proponents say they've made changes to the proposed law, including exempting houses and new buildings.

"So that buildings in the first 15 years after they have been built, will not have rent control on them," said Moya.

However, opponents are not satisfied.

"It does not incentivize developers to build more. It does just the opposite. It makes financing that much harder and it just makes fewer projects available," said Malcolm Bennett, president of the Minority Apartment Owners Association.

A new law going into effect in California next year next year will cap rent increases for many buildings at 5% plus inflation, and protect tenants from being evicted without cause.

"We believe that we need to give this legislation opportunity to work before changing it or repealing it," Bennett said.

Supporters of the Rental Affordability Act say that bill is only a foundation and that they want cities and counties to determine rent control rules.

According to Zillow, the average rent in California increased 24 % in the last decade, and more than half of tenants spend more than 30% of their income on rent.