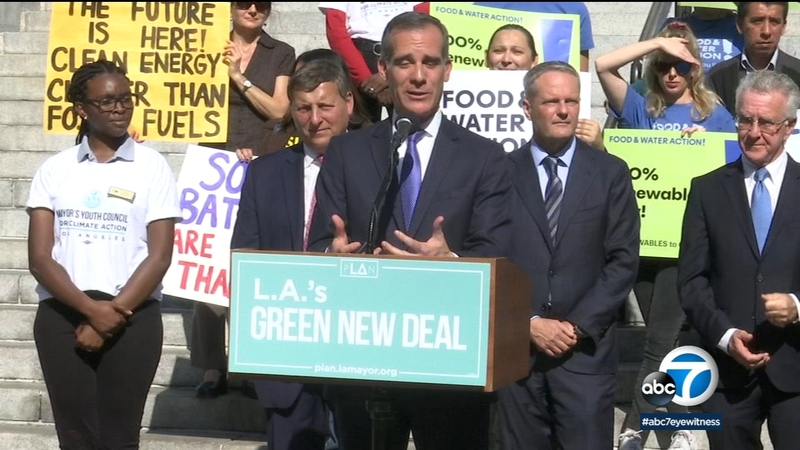 The Eland Solar and Storage Center will also supply power to the city of Glendale.

Opponents argue it comes at the cost of local jobs and the environment.

Michael Trujillo, spokesman for the nonprofit Working Californians, which is funded by IBEW Local 18, told Eyewitness News in part, "...What Garcetti is proposing will kill local middle class jobs, and the lithium batteries necessary are a toxic hazard he has no plan to figure out."

Garcetti said: "First of all, we don't lose any jobs. We have civil service and we have people who will continue to work. We cannot allow there to fracture this green-blue alliance that we've brought together over decades, that says a middle class and a good union job is somehow juxtaposed to an environmental future," he added.

The co-founder of the largest independent solar power developer in the country insisted the batteries would be fully recycled.

Critics are not convinced and Working Californians still opposes the project.

So what does this mean for ratepayers and when will they notice a change?

"This project is scheduled to be delivering energy in about two years in 2022. What this might mean for customers is about a $5 per year impact to their bill, and this is the cheapest solar energy in the United States," said Jason Rondou of the Los Angeles Department of Water and Power.