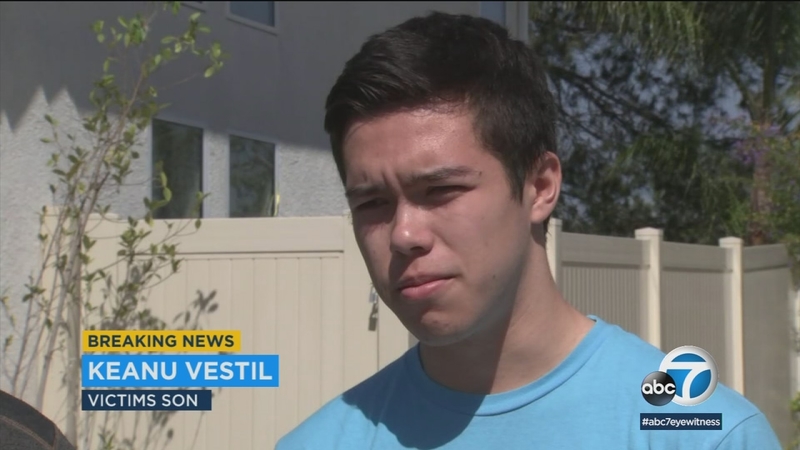 Son of OC explosion victim thanks public for support

TRABUCO CANYON (KABC) -- The 20-year-old son of the woman killed in the Aliso Viejo explosion thanked her friends and family for their support and choked back tears as he said he was still trying to process his mother's death.

Keanu Vestil was studying for college finals in Washington state when he got word of the fatal explosion that killed his mother Ildiko Krajnyak on Tuesday.

He flew back to the family's Trabuco Canyon home and spoke briefly to reporters Thursday about his mother.

"It's just all so sudden that a lot of this is still very raw," Vestil said, struggling to hold back his emotions. "And still really hard to process for everybody."

"I just want to express my gratitude for just all the love and support that I've gotten from everybody in the last two days. It's just been a lot."

Friends and neighbors of Krajnyak are also mourning her death and trying to process all the new details coming out about the explosion.

Neighbors are placing orange ribbons - her favorite color - up and down the street to honor her memory.

Friends describe her as sweet, friendly and hard-working.

Their focus now is on helping her family heal. They are also trying to raise money to help Krajnyak's 85-year-old mother return to her native Hungary.

"It's hard knowing someone we really care about had a tragic disaster like this happen to them," said neighbor Maddie Buckley. "We're trying to be there for the family as much as we can because we're all feeling it too."

Witnesses describe explosion
Krajnyak, 48, died when an explosion went off at her day spa Magyar Kozmetica on Tuesday around 1 p.m. Investigators believe the explosion was a deliberate act, caused by a package bomb.

New court documents describe the terrifying moments inside the spa as the bomb exploded, killing Krajnyak and injuring two customers.

Those two customers - a woman and her mother - were the only ones inside the spa along with Krajnyak on Tuesday around 1 p.m.

What happened next is described in a court affidavit filed by the FBI in support of a criminal complaint against Krajnyak's ex-boyfriend Stephen W. Beal for possession of an unregistered destructive device.

The two women both had received their spa treatments and then were going to the front counter to pay.

The younger woman, identified in court papers only as Victim 2, saw there was mail piled up, along with several brown cardboard boxes on the floor next to the counter.

She saw Krajnyak pick up one of the boxes, put it on the counter and open it using a tool.

As she opened it, the package exploded in a powerful blast that set off flames and smoke.

The two customers standing nearby were knocked to the ground. The older woman described seeing "everything on fire."

Krajnyak's remains were found not only inside the building but outside the window and in the parking lot.

The two women fled the building and waited for help. They were hospitalized with burns and lacerations.

FBI agents said they recovered a nine-volt battery, a cellphone, melted duct tape and loose wires. All were heavily damaged in the explosion.

Beal is now facing allegations related to explosive material found inside his home, but he has not been charged in connection with Krajnyak's death.
Report a correction or typo
Related topics:
aliso viejotrabuco canyonorange countybombingexplosives foundexplosionhomicide investigationfbi
Copyright © 2021 KABC-TV. All Rights Reserved.
More Videos
From CNN Newsource affiliates
TOP STORIES