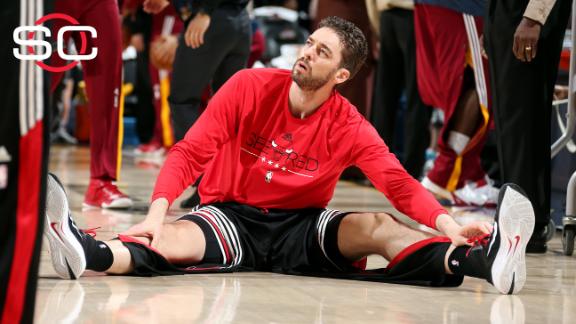 A thrilling second round moves to a full slate of Game 6s, beginning tonight with the Cavs and Clippers looking to close out their series and move into the conference finals. Our 5-on-5 crew breaks down those matchups and looks back on the best of the second round.

1. What has been THE highlight from Round 2?


J.A. Adande, ESPN.com: Paul Pierce's walkoff from the walkoff interview. Game-winning shot, perfect line to Chris Broussard -- "I called game" -- followed by the mic-drop moment. Pierce has been the best character in the playoffs.

Israel Gutierrez, ESPN.com: If you had to choose between dramatic game winners, do you take the unintended banked three from a one-time MVP, the corner dagger from the King or another game-winner off glass from an all-time scorer who followed it with one of the greatest lines ever? If you "called game!" you chose correctly.

Tom Haberstroh, ESPN Insider: Any of the buzzer-beaters, take your pick. The Al Horford put-back. The Paul Pierce bank shot. The LeBron corner 2. The Derrick Rose heave. We have had four game-winning buzzer-beaters in Round 2, which is double what we saw across the entire 2014 postseason. What did we do to deserve such awesomeness?

Marc Stein, ESPN.com: Since I'm not quite smart enough to choose between all of the buzzer-beaters, I'm just going to say watching Paul Pierce. Shot-making, trash-talking, inciting the opposition and opposing fans, Pierce is doing it all as the most compelling character of the round. You couldn't take your eyes off him, even in the Wizards' last two losses.

Brian Windhorst, ESPN.com: This is an easy question. What is the greatest playoff moment since Ray Allen's 3-pointer in the 2013 Finals? "I called game!" All we can do is hope we get another comparable moment this postseason.

2. Which series has been the most enjoyable so far?

Adande: Cavs-Bulls. Injuries are depriving it of what it should be, and the play has not always been stellar, but it is hard to top the back-to-back buzzer beaters. Not to mention this is the only second-round series that qualifies as a rivalry, thanks largely to Joakim Noah's long-standing beef with LeBron James.

Gutierrez:Cavs-Bulls. It's had its sad moments, like watching Joakim Noah and Kyrie Irving struggle through physical ailments. But when you've gotten two buzzer-beating game-winners, a classic performance from LeBron and the possibility of a Game 7, this series has to be leading in entertainment value.

Haberstroh:Warriors-Grizzlies. The contrasting styles make it not just a culture clash, but a basketball experiment of sorts. This series crosses the most items off the checklist. Sure, the East side of the bracket has been closer, but I'm not a basketball masochist.

Stein: Warriors-Grizzlies. The way Memphis shoved Golden State into a wholly unexpected 2-1 hole, combined with the Warriors' gritty response, adds up to more across-the-board quality than The Truth Chronicles in Hawks-Wizards. Narrowly.

Windhorst: Cavs-Bulls. Well it sure hasn't been the Rockets-Clippers foulfest. And while a case could be made for Hawks-Wizards, Cavs-Bulls has had two buzzer beaters, another game that came down to the final minute and a few little skirmishes thrown in.

3. Who wins Game 6 between the Cavs and Bulls?


Adande:Bulls. Pau Gasol's return will provide just enough of an offensive boost to the points-challenged team. Plus they're fighting for their very existence. Feels like the last stand for this group.

Gutierrez: Bulls. If nothing else, the Bulls should get a boost from Pau Gasol's presence alone. But it's their defense that should get Chicago to a Game 7. LeBron has shot 18 of 55 (32.7 percent) in the first two games in the United Center, including 2 of 14 from 3. He'll save his best for a Game 7 in Cleveland.

Haberstroh: Bulls. With Joakim Noah forgetting how to finish around the rim, Pau Gasol gives them a much-needed counter to Cleveland's trees in the middle. But every game of this series has gone down to the wire, so we're splitting hairs. Chicago's homecourt is the decider for me, though LeBron makes me feel uneasy about that pick.

Stein: This one would be a lot easier if you could give me a detailed breakdown of precisely who is and isn't going to be at full strength in Game 6. But let's go with Chicago. Hasn't this series seemed destined for seven games from the jump?

Windhorst: I don't know. The last three games have been decided by one or two possessions, and I have no idea what Pau Gasol or Kyrie Irving will have tonight.

4. Who wins Game 6 between the Rockets and Clippers?


Adande:Clippers. Playing at home should help J.J. Redick, Jamal Crawford and Matt Barnes, who shot a combined 6 for 30 in Game 5. Plus, this series needs to be put out of its misery. Only one game has been closer than 16 points. And the fouls, and the free throws and the fouls.

Gutierrez: Clippers. Seriously, this series needs to end. It just hasn't been great to watch. Clippers win because they're home and have a shot at their first conference finals. But everybody wins once this series ends.

Haberstroh: Clippers. They're not going to miss 26 3-pointers again. James Harden (triple-double) and Dwight Howard (exactly 20 and 15) hit traditional markers, but I felt like that win was fool's gold. The Clippers are too good to let the Rockets walk all over them again, especially on their home floor. The Clippers finally get to the conference finals.

Stein: Clippers. Props to the Rockets for forcing a Game 6 few thought they had in them after the twin debacles of Game 3 and 4 in L.A. But the Clips have so much to gain by finishing this thing off at home and potentially getting to Oakland earlier than the Warriors can for a potential Sunday start in the Western Conference finals. Just can't see Chris Paul and Blake Griffin letting that opportunity slip.

Windhorst: The Clippers are the better team right now and they absolutely don't want to face a Game 7 in Houston. I honestly don't have a great feel for how it will play out, but you assume it's the Clippers' game.


Adande: Can't make that call, even this deep into the postseason. The Warriors team that defended and splashed 3s last night looked championship worthy. But it's going to be hard to beat the LeBron that we've seen this round four times.

Gutierrez: No, but the 2014-15 champs did have their game spill into early Thursday on the East Coast. The Warriors remain the favorite to win it all, despite Los Angeles' continued improvement and Cleveland's dangerous duo. There's not much either team can do tonight to change that opinion.

Haberstroh: Nope. Golden State plays on Friday. Practically every other contender is missing a key piece due to injury. The Warriors are healthy and until that changes, I won't bet against the 74-17 squad.

Stein: Possibly. I'm picking the winner of the Warriors-Clips series we're getting in the West finals as the eventual champion. And only one of those teams is playing Thursday night. So I really can't go any farther.

Windhorst: My pick has been Warriors since the start of playoffs. Their opponents have seen key players drop like flies. I see no reason to change now.

Pau Gasol will play in Game 6
Nick Friedell reports the latest on Pau Gasol, who will be available to play for the Bulls in their Game 6 playoff matchup against the Cavaliers.