AD would put Lakers' roster 'up against anybody'

"I would put our roster up against anybody," Davis said. "I feel like that in a seven-game series that we would come out victorious."

With banners hanging above him commemorating all the NBA Finals series the franchise has won before -- 16 to be precise -- the addition of the former No. 1 pick and six-time All-Star in Davis, acquired in a trade with the New Orleans Pelicans, could be a major move back to prominence.

"What we think about Anthony Davis is this: There's no more complete basketball player in the game," Pelinka said. "There is nothing he can't do. He can shoot. He can make plays. He can defend 1 through 5. He can protect the rim. He can handle the ball. His dedication to his craft is unparalleled. To sit here next to him and think he's going to be on our team and that he's going to be a pillar of this franchise for many years is just something we're incredibly proud of."

As Davis, Pelinka and Lakers coach Frank Vogel addressed reporters, another Lakers player's presence was felt just as much: LeBron James. The four-time MVP stood in the back of the gym with a yellow sweatshirt on and black baseball cap pulled down snug on his head as he observed the momentous day for the team play out.

Davis said the chance to play with James -- whom he considers a friend, has been a teammate of in All-Star Games and an Olympics, and with whom he shares an agent, Rich Paul of Klutch Sports -- made the prospect of leaving the only NBA team he ever has played for easier to process.

"Obviously, it was tough for me to leave a city that I've been playing for for seven years, but I think it was best for me and it was my time," Davis said. "But when I found out I was getting traded to the Lakers, I realized it was an unbelievable opportunity for me to be here with a wonderful organization, and then to play alongside LeBron and obviously now the players that we have now ... to get the opportunity to do that and come here and play for an organization that's all about winning -- forget winning, winning championships, and that's the only goal -- I think that was the biggest thing for me. Just the relief there, of not knowing the unknown anymore and knowing where I was going to be next season."

When the Lakers agreed to trade Lonzo Ball, Brandon Ingram, Josh Hart and a bevy of draft picks and pick-swap considerations to New Orleans for Davis in June, next season looked mighty promising with the trio of James, Davis and Kyle Kuzma on the books.

Davis waived a $4 million trade kicker to help L.A. free up more cap space to pursue signing Kawhi Leonard, but then he saw Leonard team up with Paul George on the LA Clippers. Meanwhile, Russell Westbrook and James Harden joined forces on the Houston Rockets, and a slew of other deals around the league made championship contenders materialize almost overnight. The Lakers had to use a series of smaller signings -- notably Danny Green, Avery Bradley and two former Pelicans teammates of Davis' in DeMarcus Cousins and Rajon Rondo -- to round out the roster.

"Obviously, anytime you're able [to] acquire a player like Kawhi, you got to do almost everything to get a guy like that," Davis said. "Obviously, it didn't work out for him, but I still wanted to do whatever to help the team. That 4 million was to add more money to a player's contract that they wanted or get another guy, then by all means, I was willing to do that. And I think we did a great job of using that throughout the entire team."

Pelinka said he had countless phone calls with James and Davis to determine how to best split up the available cap space after Leonard chose the Clippers.

"It was like every day," Davis detailed. "On the hour."

That included accounting for the personal request from Davis to add capable centers so he wouldn't have to man that position as much.

Other than Cousins, the Lakers brought JaVale McGee back on a one-year deal.

He also likes wearing No. 23 -- the digits on his uniform for the Pelicans and at Kentucky -- and it was given to him by James to wear next season until the number change proved too pricey for Nike, the league's official outfitter, to pull off this late in the game without taking a financial hit because of unsold inventory featuring James in a No. 23 Lakers uniform, a source told ESPN.

"That was pretty hurtful," Davis said as he shook his head.

He settled on No. 3 after seeing how the different uniform numbers available to him looked on his avatar in the video game NBA 2K.

"The first number that I ever wore was No. 3," he said. "When I saw that number was available, I wanted to take it all the way back to where it first started and put that number back on."

Davis is on the final year of his contract, set to pay him $27.1 million this season. Although, according to sources, he intends to re-sign with the Lakers long term in the summer of 2020, he did not commit to that publicly Saturday.

"Honestly, I'm focused on this season," he said. "When I got traded here, my goal is to bring a championship here with the team that we have. And when that time comes around next year, then you can ask me that question and we'll revisit it. Right now, my focus is on this year and trying to figure out how I can help this team and help the organization become a championship team."

A championship run would be a pleasant change of pace for Davis, who made the playoffs only twice in his time with the Pelicans. And it would be almost as dramatic a turn of events as when his lazy Saturday afternoon spent lying in a hotel bed in Malibu, California, watching a movie was interrupted by news of his being traded to the Lakers.

His attention was pried from the television screen as he pondered the big life change in store. 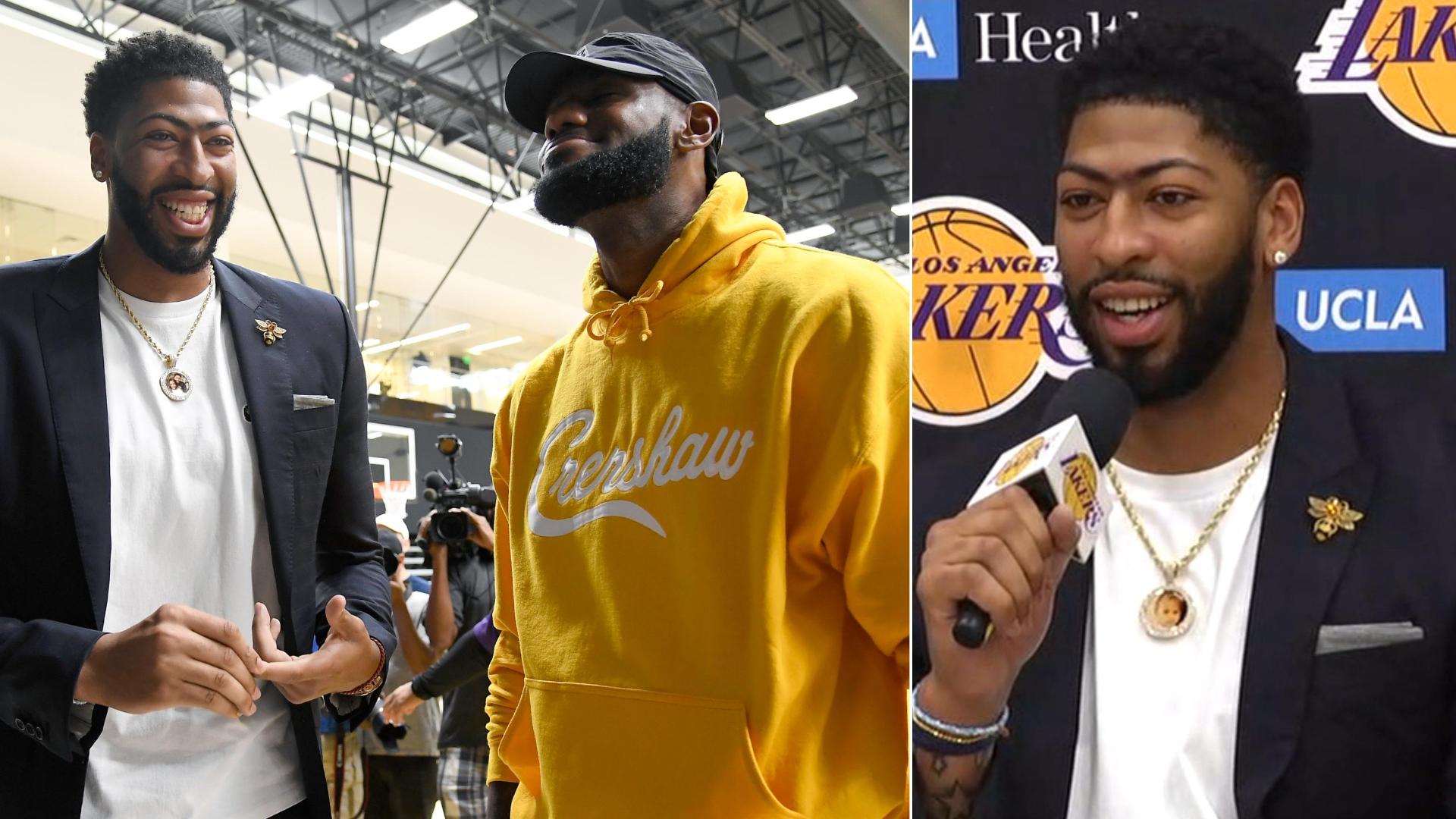 AD excited to play alongside LeBron
Anthony Davis jokes that in the 2012 Olympics he didn't play too much with LeBron as he was the "towel guy" but he is excited to be on the same team this season. 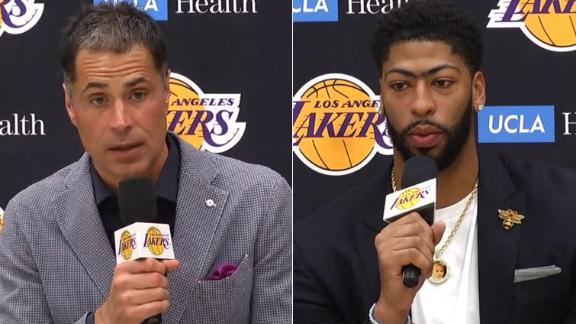