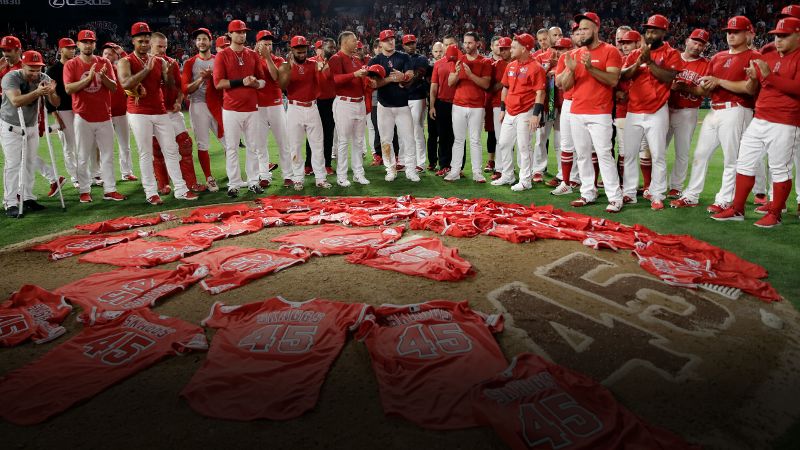 A public relations employee for the Los Angeles Angels told federal investigators that he provided oxycodone to Tyler Skaggs and abused it with him for years, and that two team officials were told about Skaggs' drug use long before his death, according to two sources familiar with the investigation.

Eric Kay, the Angels' director of communications, also gave U.S. Drug Enforcement Administration agents the names of five other players who he believed were using opiates while they were Angels, the sources said.

Skaggs died in a Southlake, Texas, hotel room on July 1 from choking on his own vomit, according to the Tarrant County Medical Examiner's Office. He was 27. Skaggs' autopsy, released Aug. 30, found evidence of fentanyl, oxycodone and alcohol in his system. Outside the Lines reported on Sept. 18 that the DEA had begun an investigation into the source of the fentanyl.

Kay told investigators he illegally obtained six oxycodone pills and gave three to Skaggs a day or two before the team left California for the road trip to Texas, according to the two sources. Kay told DEA agents he does not think the pills he obtained for Skaggs were the same ones the pitcher took the day he died because Skaggs typically would ingest the pills immediately after receiving them from Kay, the sources said. Skaggs also texted Kay the day the team left for Texas seeking more oxycodone, a request Kay told investigators he was unable to fulfill, the sources said.

Agents initially learned about oxycodone transactions between Kay and Skaggs after reviewing text messages between the two, according to the sources.

Kay told DEA investigators that hours before Skaggs' death in July, Skaggs was in his Southlake Hilton hotel room and texted Kay to visit him, according to a source familiar with what Kay told the DEA. Kay also told investigators that Skaggs snorted three lines of crushed opioids in front of him, the sources said. Kay recognized that two of the lines could have been crushed oxycodone, but the third was not a substance he recognized, the sources said. Kay said he did not take any drugs despite being offered them by Skaggs, the sources said, because he was on a medication that would have negated the effects.

After Skaggs' cause of death was announced, his family issued a statement saying, "We were shocked to learn that it may involve an employee of the Los Angeles Angels. We will not rest until we learn the truth about how Tyler came into possession of these narcotics, including who supplied them."

On Saturday, the family's attorney, Rusty Hardin, said, "The Skaggs family continues to mourn the loss of a beloved son, brother, husband, and son-in-law. They greatly appreciate the work that law enforcement is doing, and they are patiently awaiting the results of the investigation."

Kay's mother, Sandy, reached by Outside the Lines, said her son started abusing opioids a few years after his father died in 1998. Eric Kay is currently in outpatient treatment for substance abuse and has been placed on paid leave from the Angels.

Kay told investigators that he and Skaggs had worked out an arrangement in which Kay would obtain drugs for Skaggs and himself, and Skaggs would pay for them. Outside the Lines reviewed Venmo transactions alleged to have occurred between Skaggs and Kay, which show a series of payments over two years ranging from $150 to $600.

Kay has sought treatment for substance abuse twice this year, according to his mother and his wife, Camela. While recovering in the hospital from an overdose on April 22, Kay received a text from Skaggs seeking drugs, they said. Sandy was visiting her son in the hospital at the time, alongside his wife and Tim Mead, the former Angels vice president of communications and Kay's supervisor. Sandy told Outside the Lines she saw the texts and told Mead that the team needed to get Skaggs "off his back."

Mead, who left the Angels in June to become president of the Baseball Hall of Fame and Museum in Cooperstown, New York, told Outside the Lines he doesn't recall hearing Skaggs' name in that conversation, or that Skaggs was an opioid user at any other time.

According to the two sources familiar with what Kay told DEA investigators, Kay told agents that he had first mentioned Skaggs' use to Mead in 2017. In addition, Kay told investigators about a second Angels official who knew of Skaggs' use.

"I have had a lot of conversations with Eric Kay about a lot of things, but opioids and Tyler Skaggs were not one of them," he said. Asked if he was ever aware that Skaggs used opioids before his death, Mead said, "No."

Angels team spokesperson Marie Garvey told Outside the Lines that the second official also denied knowing about players ever seeking drugs or Skaggs' use of them. "We are shocked to hear these reports. ... We had no prior knowledge of Tyler or any other member of the Angels organization having abused opioids or any narcotic and continue to work with law enforcement to get answers."

Under Major League Baseball's rules, any team official made aware of a player's drug abuse must report it to the commissioner's office immediately. An MLB official familiar with discussions between the Angels and MLB but who spoke on the condition of anonymity said no one from the Angels ever made such a notification.

Molfetta, Kay's attorney, declined to allow Kay to comment for this story.

The presence of fentanyl in Skaggs' system drew the attention of federal investigators. One senior DEA official told Outside the Lines last month that the agency typically gets involved in fentanyl cases in an effort to track the source of the drug. Fentanyl, a powerful synthetic opioid sometimes found in counterfeit oxycodone, has been linked to a number of high-profile drug-related deaths, including musicians Prince, Tom Petty and Mac Miller.

In some alcohol- or drug-related deaths, a supplier can face criminal charges. Several lawyers interviewed by Outside the Lines, however, said it might be difficult for prosecutors to prove that Kay or anyone else was responsible for Skaggs' death, as it would be difficult to establish exactly whether alcohol or which drugs caused his death.

Asked if Kay was a target of the investigation, Molfetta said, "At this point, I have not been informed of that. I have been informed by one branch of the U.S. Attorney's office that they're not ready to make that designation at this time, and I have not broached that with the other office."

This past season was Kay's 24th with the Angels; he started working for the team as a communications staff intern in 1996, according to the team's 2019 media guide. Kay, 45, has been a director of communications since 2014.