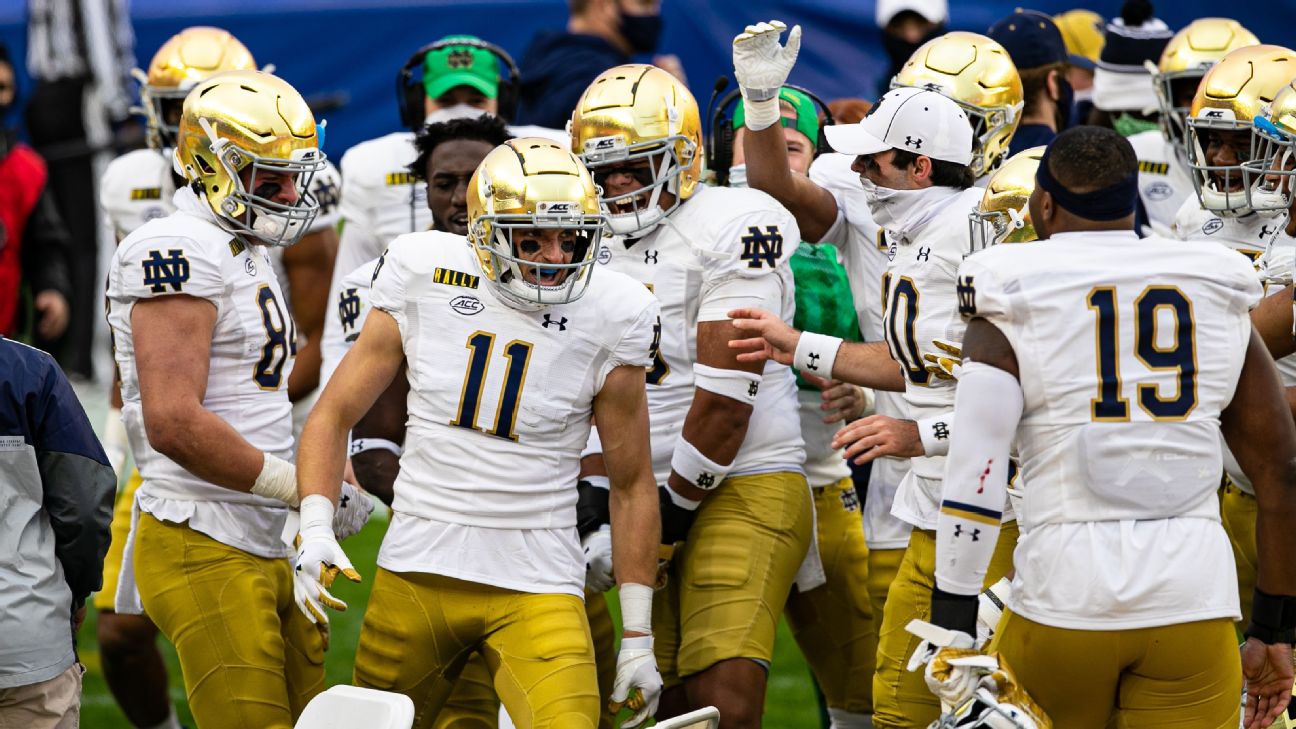 The new AP Top 25 college football poll is out, and Alabama remains a unanimous No. 1, with Notre Dame and Ohio State behind the Crimson Tide. Here's what's next for each ranked team.

As the Heisman Trophy race heats up, Alabama has given voters another name to consider in addition to quarterback Mac Jones: DeVonta Smith. The senior wide receiver has been nothing short of spectacular this season, catching 15 touchdowns in 10 games. He has truly done it all. He has rushed for one touchdown, and against Arkansas, he got his first special-teams touchdown on a punt return. While his odds of taking home the Heisman are long -- it's a quarterback's award, if we're being honest -- Smith deserves consideration as perhaps the best individual player in college football. -- Alex Scarborough

The Irish are getting ready to play in their first (and possibly last) conference championship game after making a one-year arrangement to join the ACC this season. Coach Brian Kelly said as soon as his players found out they were eligible for the conference championship, they put it on their list of goals and have been aiming for it ever since. With Clemson standing in the way, the Irish are obviously facing a familiar opponent, but this game will be different because Clemson QB Trevor Lawrence will be playing. His added dimension in the run game and how the Irish defend that will be something to watch in the rematch. -- Andrea Adelson

The Buckeyes didn't play The Game against Michigan because of coronavirus issues within the Wolverines program. Up next for OSU is Northwestern in the Big Ten championship, after the conference officially changed its policy that teams must play six games to be eligible for the game. Ohio State was one of the programs that fought the hardest to play this season because the Buckeyes felt they had a great shot at a national championship, and so far, they're still on track. -- Harry Lyles Jr.

As the Tigers attempt to win their sixth straight ACC championship, all the questions surround how healthy they are on defense headed into their rematch against Notre Dame. In their first meeting, quarterback Trevor Lawrence was unavailable after testing positive for the coronavirus, and top defensive players Tyler Davis and James Skalski were also out with injuries -- and that had a major impact on the game. Davis has returned and played well; Skalski played only one series in their last game against Virginia Tech, but Dabo Swinney said Skalski is in a "good spot" headed into Saturday. -- Adelson

After their game against Ole Miss was canceled, the Aggies got to watch Florida lose to LSU, which will end the talk that the Gators should pass A&M. This weekend, the Aggies will play at Tennessee while waiting to see what happens for the teams in front of them. If the Aggies win, Alabama beats Florida and Notre Dame gets a second win over Clemson, a spot in the playoff could follow. -- Dave Wilson

The Bearcats haven't played since they escaped at UCF with a 36-33 win on Nov. 21. After their game against Tulsa was canceled for this past weekend, the Bearcats will face ... Tulsa next weekend in the AAC title game. An undefeated season and a conference championship are within reach, as well as pushing the playoff committee to see how high they can climb. -- Wilson

The Hoosiers ended up having the week off, as their regular season ended when their rivalry game against Purdue on Saturday was canceled. Though they did suffer one loss this week, as South Alabama hired defensive coordinator Kane Wommack away. They finish the regular season with a 6-1 record, with their lone blemish a narrow 42-35 loss to Ohio State. -- Lyles

The Cyclones had an off week to prepare for their first appearance in the Big 12 championship game, where they'll get a rematch with Oklahoma. The Sooners, whose game against West Virginia on Saturday was canceled, will be rested and ready as well. These two teams have split their last four meetings, all of which have been decided by 10 points or fewer, and the Cyclones won the most recent one, a 37-30 victory on Oct. 3. --Khan


The Chanticleers completed their perfect regular season with a scare from Troy, which almost pulled off the perfect trap-game scenario. Coastal gave up 38 points, the most in any game this season. But offensively, the Trojans (much like everybody else this season) had no answer for Coastal's offense, and theChanticleers were able to pull out the win in the final minute of regulation. The Sun Belt title game and Billy Napier's Louisiana Ragin' Cajuns are the final obstacle stopping them from a New Year's Six bowl. -- Lyles

The Bulldogs continue to make their case for a New Year's Six bowl, winning three games in a row as the offense makes significant strides forward since the addition of quarterback JT Daniels to the starting lineup. Granted, those wins have come against Mississippi State, South Carolina and Missouri, but this Georgia team looks more like what we expected in the preseason when it was listed among the playoff contenders. The offense is balanced and the defense is among the best in the country. And while the playoffs are out of the question with two losses, taking care of business at home against Vanderbilt next week would put Kirby Smart's team in good position for a top-shelf bowl game. -- Scarborough

The loss to LSU stung for the Gators, who had an outside chance at the College Football Playoff entering the weekend. Could they still squeak their way in if they upset Alabama in the SEC championship game? Perhaps, but it seems unlikely, and they'll still need multiple teams above them to lose. Regardless, their focus must turn to Atlanta and their chance for a conference championship. -- Sam Khan Jr.

The Sooners get another shot at Iowa State, who beat them 37-30 on Oct. 3. Cause for optimism in facing ISU running back Breece Hall: The OU defense has been stout over the past five games, allowing just 81.4 rushing YPG, ranking third in the country over that span. The Sooners also will have Rhamondre Stevenson, who didn't play in the first game and is averaging 5.9 yards per carry and nearly 100 per game. -- Wilson

USC heads into another short week preparing for two opponents: Washington and Oregon. The Huskies are on the schedule for Friday's Pac-12 championship game, but after they were unable to play against Oregon on Saturday because of COVID issues, it's fair to question whether they'll be able to play against USC. If Washington isn't ready, it will be replaced by the Ducks, who finished second in the North. -- Bonagura

The Cougars' loss to Coastal Carolina last week almost assuredly cost them a shot to play in the Fiesta Bowl, and now they will wait to learn which lower-tier bowl they will play in. A bowl victory would give BYU its first 11-win season since 2009, when it finished No. 12 in the final AP poll. --KyleBonagura

The Wildcats easily handled Illinois on Saturday with an impressive 409 yards rushing en route to a 28-10 win. This week they'll be doing something most didn't expect this season: competing for the Big Ten championship against Ohio State. Pat Fitzgerald joked after their win Saturday, "I'm sure we're going to be underdogs by like 70." That obviously won't be the case, but they will certainly be viewed as a long shot. -- Lyles

Those who follow the ACC on a regular basis know what UNC running backs Javonte Williams and Michael Carter are capable of doing, and that was on full display in a top-10 matchup on national television against the Hurricanes. The Tar Heels' performance in the win over Miami made their losses to Florida State and Virginia this season all the more perplexing. But their sheer dominance should put the Tar Heels in position to earn a New Year's Six bid to the Orange Bowl. If Clemson beats Notre Dame in the ACC championship game and both teams make the playoff, it seems reasonable to think the committee would move the Tar Heels ahead of Miami in its next rankings -- and that would be the key for the Orange Bowl nod. -- Adelson


Now that the talk of coach Billy Napier staying or going has quieted for the time being, it's back to work for the Ragin' Cajuns, who had last week off. Finishing the regular season 9-1 was nice, but Saturday's game against Coastal Carolina offers the chance for revenge after a three-point loss to the Chanticleers on Oct. 14, as well as the opportunity to make a statement and take home the Sun Belt championship. -- Scarborough

The Hawkeyes are playing excellent ball, having won six in a row entering their regular-season finale. No Big Ten team has been as stingy as Iowa in November and December, as the Hawkeyes have allowed only 13.8 points per game during that stretch. All that's left is a to-be-determined championship week opponent and a bowl destination. -- Khan

With their next game against Georgia Tech officially canceled, the Hurricanes end their regular season with a disappointing performance against North Carolina -- one that might end up costing them a spot in the Orange Bowl. Against the two best teams on their schedule -- Clemson and North Carolina -- the Hurricanes struggled particularly in the trenches and got completely out-physicaled in ways that rendered them incapable of both slowing down their opponents and making plays on offense. There is no question Miami made strides this season in getting the program headed in the right direction, but there is clearly more work to do. -- Adelson

After a nine-point loss to Oklahoma State to open the season, it has been a magical season for the Golden Hurricane, who have won six straight, including four fourth-quarter comebacks. There's one more giant hurdle: Saturday's AAC championship game against a top-10 Cincinnati team that has won four of the last five against them. If this season has proved anything, it's that you can't count Tulsa out. -- Wilson

After its game against Kansas was canceled because of a coronavirus outbreak, Texas finishes the regular season at 6-3 and awaits a bowl game. Meanwhile, Texas AD Chris Del Conte attempted to quell the speculation surrounding Tom Herman's status by stating on Saturday that Herman will remain the Longhorns' coach. After falling below expectations again in 2020, the pressure will be on Herman and his staff to take a big step forward in 2021. -- Khan

Assuming the Flames don't line up an opponent for this week, they will finish the regular season 9-1 and hope for a bowl invitation. Their record seemingly would make that a foregone conclusion, but with a shrinking bowl lineup, it's possible Liberty has played its final game of the season. -- Bonagura

Jaret Patterson needed just five games to reach the 1,000-yard mark in rushing, and Buffalo remained unbeaten Saturday with a 56-7 rout of Akron. Patterson has 1,025 yards and 18 rushing touchdowns on the season, and the Bulls will now set their sights on the Mid-American Conference championship game. Buffalo is 5-0 for the first time since 1980, when the Bulls were a Division III program. -- Chris Low

The Wolfpack completed their regular season a week ago with a 23-13 victory over Georgia Tech and will now wait to see where they land in the bowl pecking order. After losing back-to-back games to North Carolina and Miami, NC State closed with four straight wins and was able to overcome the loss of starting quarterback Devin Leary earlier in the season. -- Low

The Spartans rallied from a 20-7 halftime deficit Friday night to beat Nevada 30-20 and remain unbeaten. San Jose State, which had back-to-back games canceled to end November, is off to its best start since 1939, when the Spartans finished 13-0. They will now turn their focus to Boise State and the Mountain West Conference championship game on Friday. -- Low 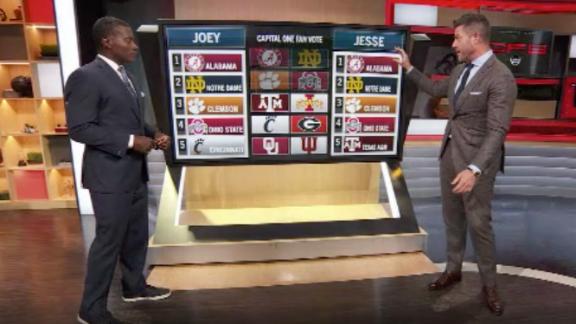