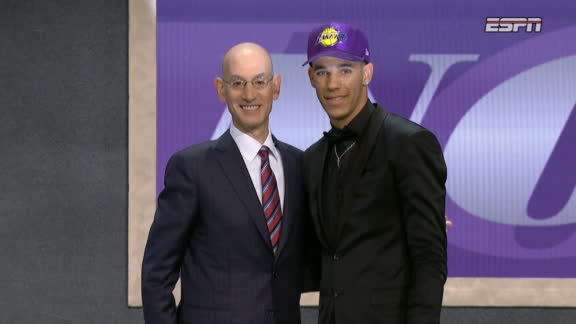 Thursday night's NBA draft turned into an advertisement for the Big Baller Brand.

It started with a subtle black logo onLonzo Ball's black bow tie, but became more pronounced after Ball was taken No. 2by the Los Angeles Lakers.

That's when Ball's father, LaVar, who had a "BBB" tie on, pulled out a hat with the Big Baller Brand logo on it in Lakers purple and gold.

Moments later, Lonzo's signature ZO2 shoes were being offered for sale in Lakers colors on the company's website. The price was $495, the same as the first version of the shoes, with the promise of shipping pairs to customers by Feb. 10.

"Big Baller Brand, we about to launch it off now," said LaVar Ball, when stopped while walking through a hallway at Barclays Center in New York. "We are about to do some things."

Not missing a beat, Lonzo changed out of his dress shoes and wore the new shoes he will wear at Staples Center in the fall when he was introduced by commissioner Adam Silver.

"I had them on after Markelle [Fultz] got picked," Lonzo said. "I had a good feeling I was going to be staying home. I'm glad that they picked me because I didn't have any other shoes under the table."

Information from ESPN's Ohm Youngmisuk was used in this report.