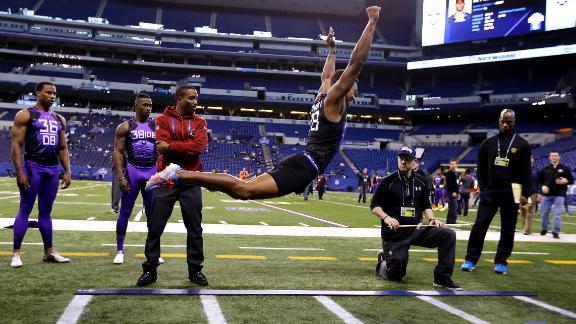 Shortly after Jones uncorked a standing broad jump of 12 feet, 3 inches -- believed to be a scouting combine record -- USA Track and Field sent out its regards on Twitter to @Byron16Jump.

Jones made the leap during the late morning workouts for the second group of defensive backs. Records are difficult to find for the combine before 1999.

"My personal [broad jump] record was 11-7. That's what I was doing at the training facility, and I obviously broke that," Jones told The Associated Press in a telephone interview. "It feels good to put a PR [personal record] up."

Jones told the AP that he feels his broad jump may have improved his stock with teams, "but at the end of the day, the film is what is most important."

"You've got to have good film, so I'm relying on that," he said.

New England Patriots linebacker Jamie Collins is believed to have held the previous record, at least since the combine was first held in Indianapolis in 1987. Prior to that, there were several regional combines.

Broad jumps of 11 feet are rare at the combine. Donald Washington, a fourth-round pick by the Kansas City Chiefs in the 2009 draft, had an 11-3 showing at the combine that year. At the 1998 combine, Artrell Hawkins had an 11-3 broad jump and Izell Reese leaped 11-1.

Jones, a New Britain, Connecticut, native, also had a 44-inch vertical leap Monday, among the best showings in that drill in this combine. Georgia wide receiver Chris Conley had a 45-inch vertical leap in Saturday's workouts at Lucas Oil Stadium.

Jones started seven games last season before suffering a torn labrum in his left shoulder in late October that required surgery to repair. He did not do any of the other drills at the combine Monday because of that and did not run a 40-yard dash.

Connecticut has scheduled its on-campus pro day for March 31.