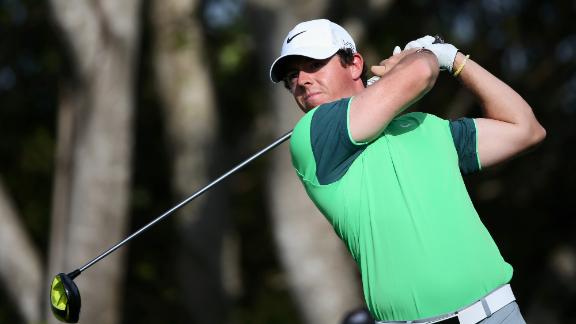 PALM BEACH GARDENS, Fla. -- Even the best player in the world can apparently have a bad day once in a while, and it was a tough one on Thursday for Rory McIlroy at PGA National.

Making his first PGA Tour start of 2015, McIlroy hit his first tee shot in a bush, made two double-bogeys over his first nine holes and finished with his worst score in America since August during the first round of the Honda Classic.

McIlroy's 3-over-par 73 was his worst since a third-round 76 at the Australian Open in November and a 74 in the first round at the Barclays in August -- his first round after winning three straight tournaments, including two majors.

"The conditions were obviously very tricky from the start," McIlroy said. "From the first hole, it was always going to be a day like that. I feel like I salvaged something out of the round the last couple holes, but it was just a day to keep trying, not to give up and know that anything around level, 1-, 2-over par still isn't out of it.

"So wasn't quite what I wanted, but hopefully tomorrow morning we get calmer conditions and we're able to give ourselves a few more opportunities and make some birdies."

To be sure, it was a difficult day for nearly everyone in South Florida, where local pro Jim Herman shot 65 to take the lead. Three-time major winner Padraig Harrington was two shots back, and U.S. Open champion Martin Kaymer shot 68 to finish three behind. Phil Mickelson shot 71.

Those players teed off in the morning, when the weather was far from benign but not as treacherous as the blustery conditions in the afternoon.

In fact, the group of McIlroy, Johnson and Brooks Koepka played in a combined 18 over.

"I mean, walking from 14 green to 15 tee, I said to Brooks, let's just make a couple birdies on the way in, try and get something out of it," McIlroy said. "Luckily I was sort of able to do that."

McIlroy is playing the United States for the first time since the Tour Championship in September. In his previous 12 worldwide tournaments, he has four victories and four second-place finishes, including a win three weeks ago in Dubai on the European Tour."

That's why McIlroy wasn't going to be hard on himself following one round.

"I'm coming off a three-week break and tough conditions to come back out in," he said. "I knew that my game is there. Today wasn't obviously what I wanted to start with, but if I can get it into red numbers tomorrow I'm right back in the tournament."

McIlroy Struggles In First Round Of Honda Classic
Rory McIlroy is tied for 79th after shooting a 73 at the first round of the Honda Classic.