KABC
By Rob Hayes
LOS ANGELES (KABC) -- A day after raw sewage bubbled up onto the Dodger Stadium field, crews were working to diagnose exactly what went wrong and clean up the field in time for Thursday's season opener.

During the fifth inning of the preseason game between the Dodgers and Angels, a pool of liquid began bubbling up on the field near the Dodgers dugout.

At first some thought it was a broken sprinkler, but it didn't take long for the overpowering stench to reach thousands of nostrils.

After about half an hour, the game - the final of spring training - was called in the fifth, counting as a preseason win with the Dodgers up 4-3.

The team says a sewer main backed up. Late Wednesday, the organization issued a statement: "The Dodger organization has identified the cause of the on field flooding last night, which ended the game in the bottom of the fifth inning.

"There were issues with the drainage system at Dodger Stadium. The club has made repairs and has thoroughly examined the entire system. The team is confident that there will be no further issues."

For those who attended the game, refunds will not be issued for the mishap but will offer discounted tickets for the games against the Miami Marlins.

Crews were on the field Wednesday continuing to clean up the mess and make sure it doesn't happen again on Thursday.

That's when the season opens at home for the Dodgers with a matchup against their longtime archrivals, the San Francisco Giants.

Well 💩, looks like we have to call this game early. pic.twitter.com/Ws3XiIweo0

Smell ya later Dodgers, it's been fun. Next stop: Oakland! #OpeningDay pic.twitter.com/dCAwJb6R3D 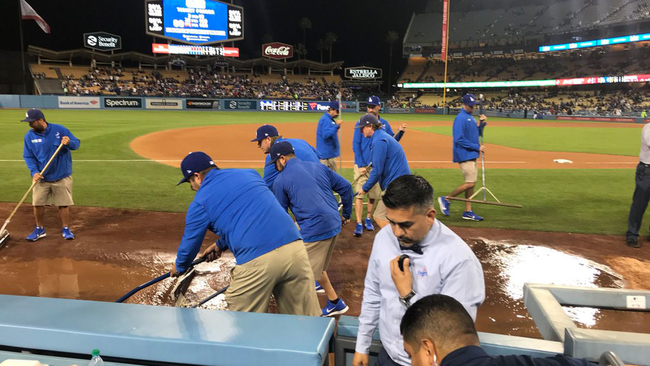