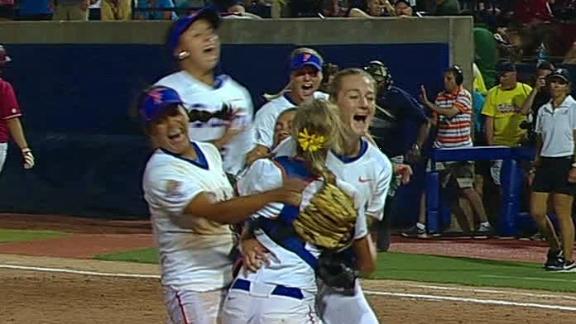 OKLAHOMA CITY -- Florida coach Tim Walton took a chance, and it paid off and helped the Gators win their first NCAA softball championship.

Walton chose not to start ace pitcher Hannah Rogers in Game 2, but she entered in the sixth inning after Lauren Haeger and freshman Delanie Gourley handed her a lead. Rogers gave up one run in two innings and earned the save as the Gators defeated Alabama 6-3 on Tuesday night to sweep the best-of-three championship series.

Walton told Haeger on Monday night that she would start Tuesday, and Walton said he didn't sleep well afterward because Rogers had been nearly untouchable during postseason play. He still thought the decision made sense because he felt depth was important in a best-of-three series, and he was confident in the rest of his staff.

"Hannah was just on fire, and to take her out of this game and to throw the other two, I know was gutsy and I know it was bold," Walton said. "But we've talked all year long -- we don't have a superstar on our team. We have a bunch of players who do their job, and today was a tribute to that. We got a Lauren-quality start, and Delanie gets the W, and Hannah gets the save."

He has at least one superstar. Rogers was named the tournament's most outstanding player after going 4-0 in five appearances at the Women's College World Series and posting a 1.00 earned run average.

Alabama's Jackie Traina, one of the nation's best pitchers, gave up five runs in 1 1/3 innings before getting pulled for the Tide (53-13). Walton didn't start Rogers on Tuesday for fear that what happened to Traina would happen to his ace. The Gators had some success against Traina in Game 1 on Monday and started figuring things out. Tuesday was Traina's shortest start of the year.

"We've seen her (Traina) a lot, and we think that was kind of beneficial to us," Walton said. "We got a lot of runs off of her after we faced her yesterday, and I think that could have been the same result if we started Hannah. Back-to-back days against good hitting teams that use video and have smart coaches -- they're going to make adjustments."

Florida, the national runner-up in 2009 and 2011, beat its Southeastern Conference rival despite committing four errors and giving Alabama plenty of chances to score.

"We just couldn't get that big inning," Alabama coach Patrick Murphy said. "We hit into way too many double plays -- you know -- unlucky. But I'm really pleased with my team. I thought it was one of the easiest teams I've ever had to coach."

It looked early as though Walton's decision to start Haeger would backfire. After getting just one hit in the first six innings Monday against Rogers, Alabama got singles from Haylie McCleney and Kallie Case in its first two at-bats Tuesday. Jadyn Spencer singled to knock in McCleney, giving Alabama its first run of the championship series. But that was the only run Alabama got out of the three-hit inning.

In the bottom of the first, Florida's Stephanie Tofft cranked a 2-2 pitch with two outs over the left-field fence to tie the score. Traina threw 34 pitches in the first inning.

Florida's Kelsey Stewart knocked in Aubree Munro to give the Gators a 2-1 lead in the bottom of the second. After that, Kirsti Merritt hit a three-run homer to push the lead to 5-1 and chase Traina.

Alabama's Kaila Hunt hit a solo shot in the top of the third to trim Florida's lead to 5-2.

Haeger lasted three innings before giving way to Gourley. After an error, Alabama had runners on second and third with no outs. McCleney walked to load the bases with two outs, but the Gators again escaped unscathed.

Rogers entered the game in the top of the sixth and pitched a perfect inning. Florida gave her an insurance run in the bottom of the sixth to make it 6-2.

"We all want to end our career with a win," Hunt said. "But the biggest thing I'm going to take away from this is the relationships and the friendships that I've built over the past four years with these people, because it's not going to matter in 20 years whether I ended my career with a win or not."