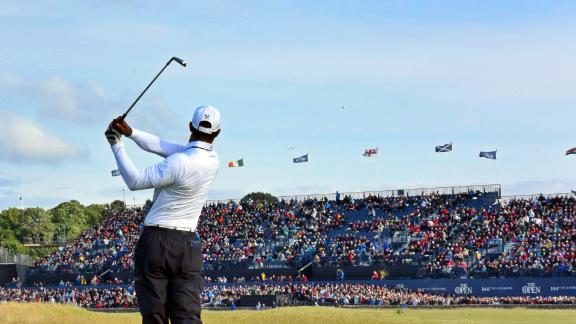 Tiger Woods has dropped to 258th in the official world golf ranking on the heels of another missed cut, this one at The Open last week.

But as Woods' game continues to plummet, one former great hopes the 39-year-old can recapture his greatness soon.

Because in South AfricanGary Player's eyes, the sport needs Woods to spread the game globally.

"We need Tiger Woods. Why? He's a man of color. We need a black champion," Player told Omnisport, a Europe-based sports news service, this week at the Berenberg Gary Player Invitational in Virginia Water, England. "Go to Africa, where we've got all these young black kids used to seeing a white guy as the champion. Now they're getting inspired; they're sitting in front of their TV sets. It inspires them; it gets them interested in golf.

"Asia wants to see a man of color. So there are many reasons besides being so charismatic. I don't know if anybody in the world today can play like Tiger Woods did."

Woods has won 14 major championships but none since 2008. Jack Nicklaus' record of 18, which Woods once seemed certain to pass, looks more distant than ever.

Player, a nine-time major champion, called it "sad" to see Woods' struggles. He's criticized Woods' decision to change his swing before, and he reiterated that point this week, saying the former world No. 1 could benefit from some instruction by someone who once played the game at a top level.

"He won the U.S. Open by 15 shots and was having a lesson the next week," Player told Omnisport. "He's had lessons from four people or five people who really are not that good at playing.

"You've got to go for a lesson with someone who has been in the arena. If I want to know about business, I'll go to a businessman, I'll come to you for good interviews; everyone has got their skills.

"But Tiger Woods, he needs it overall -- mentally, physically and theoretically -- so he can get back to normality."

Woods is currently working with swing consultant Chris Como after parting ways with Sean Foley, his swing coach of four years, in August 2014.