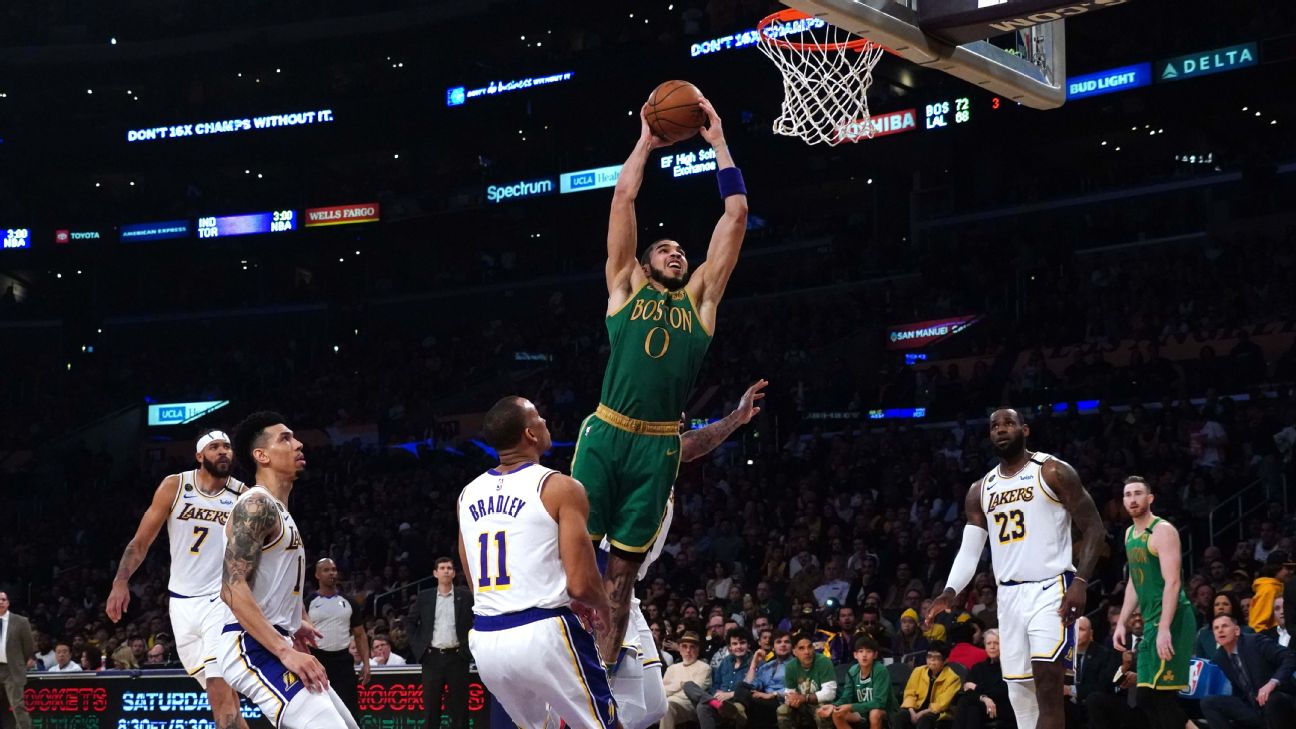 James, the Los Angeles Lakers' superstar, had just drilled a go-ahead jumper with 30.4 seconds left to tilt the balance in his team's 114-112 win over theBoston Celticsat Staples Center on Sunday.

But Tatum, who is 14 years James' junior, also delivered a dominant performance, tying his career high with 41 points.

That figure made the 21-year-old Tatum the youngest player with a 40-point game in the history of the Celtics-Lakers rivalry, including the postseason. It also made Tatum the first Celtics player to score 40 or more points in the rivalry since Paul Pierce did so in March 2001.

"That kid is special," James said of Tatum. "Obviously, that's the reason he's a first-time All-Star. He's been special all year."

The Celtics fought valiantly despite being without star point guard Kemba Walker, who remained sidelined because of left knee soreness.

"We still should've won," Tatum said. "We know that. We can't make excuses when guys are out. That was definitely a game we should've won."

"I just wish we would've won," he said. "That's all that really matters. I know what I'm capable of. My teammates know that. We know what each and every guy can do in here."

Celtics swingman Jaylen Brown said of his teammate: "Tatum has reached a new height -- superstar level. We've all got to continue to improve and go with him. The way he's playing is unreal. We've got to continue to find ways to allow him to reach his potential."

Brown continued: "At the same time, we've got to continue to find ways to win games and be the team that we're supposed to be. He's been playing unreal. It was a joy to watch him tonight. I wish we would've got the win, but to come in here and do what he did to the Lakers, [there are] not too many people who can say they did that."

Tatum did most of his damage in the second and third quarters, scoring 36 points in that stretch while hitting 11 of his 15 shots from the field. In the fourth quarter, the Lakers began double-teaming him on defense, and Tatum was held to four points on 1-of-3 shooting from the field in the final period.

"Just try to make it tough on the kid," James said, "but he was special all night."

Lakers coach Frank Vogel called Tatum "one of the best players in the world."

"He was in the All-Star Game for a reason," Vogel said. "He has the ability to go [for] what would have been a potential 50-, 60-point night had we not just have brought extreme double-teams for the better part of the second half."

In that final quarter, the Celtics were whistled for twice as many fouls as the Lakers, 12 to six. The Lakers went to the line 17 times in the fourth quarter, compared to five attempts in that quarter for the Celtics. Boston coach Brad Stevens was called for a technical foul with 15.5 seconds left after arguing what he thought should've been a foul called on the Lakers.

"I thought there was one there, but they didn't call it," Stevens said. "It is what it is."

Said Brown: "It's a tough one. We felt like we could've won. We should've won."

Tatum became the first player to score 40 points in the rivalry since Kobe Bryant did so in January 2011.

"That's what he does," Stevens said of Tatum. "I realize it's his career high, but he's been at that level for us for a long time now."

"Certainly, I think he has taken it to another level," Celtics forward Gordon Hayward said of Tatum.

On Sunday, Tatum wore a wristband honoring Bryant, who will be memorialized Monday morning at Staples Center. Speaking of Bryant's presence, Tatum said: "We definitely felt it." 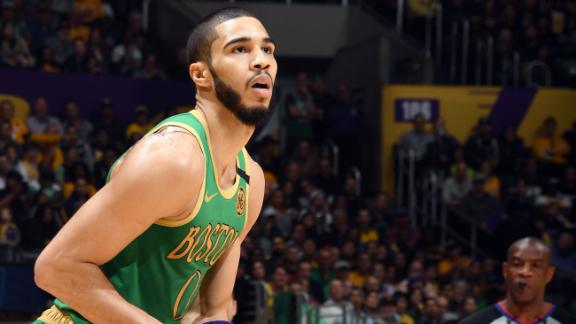