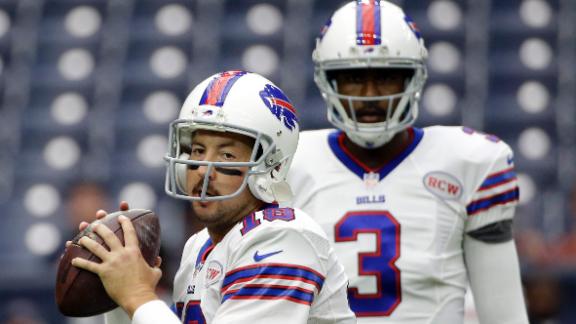 After starting 2-0, the Bills have lost each of their last two games. Orton will start Sunday at Ford Field against the Detroit Lions.

"It's not all EJ's fault, but we need to get better production, obviously, out of that position," coach Doug Marrone said Monday. "We have to make adjustments. We've got to make some changes, because we can't keep going in the direction that we're going."

Marrone made the decision Monday and informed general manager Doug Whaley of the change.

"I went to Doug, I said look, 'This gives us the best opportunity to win.' We talked about it. We looked at some things, and we were in full agreement on it," Marrone said.

Manuel started 14 games for the Bills after being selected 16th overall in the 2013 draft, posting a 6-8 record.

"It gives him a chance to just step back for a moment, look at things that, you know, we can work on and correct," Marrone said. "And again, he'll have to have some thick skin through this. And you've got to fight, and that's usually what happens in life to get what you want, you're going to have to fight for it.

The quarterback woes continue in Buffalo -- since drafting Jim Kelly in the first round in 1983, the Bills have failed to draft a quarterback that posted a winning record in Buffalo, according to ESPN Stats & Information.

Since Kelly retired in 1996,the only starting quarterback for the Bills to have a winning record is Doug Flutie. Manuel is currently two games under .500 in his career as a starter in Buffalo.

Bills Replace Manuel With Veteran Orton
Adam Schefter and Louis Riddick react to the news that the Bills have named Kyle Orton to replace EJ Manuel as the team's starting quarterback.