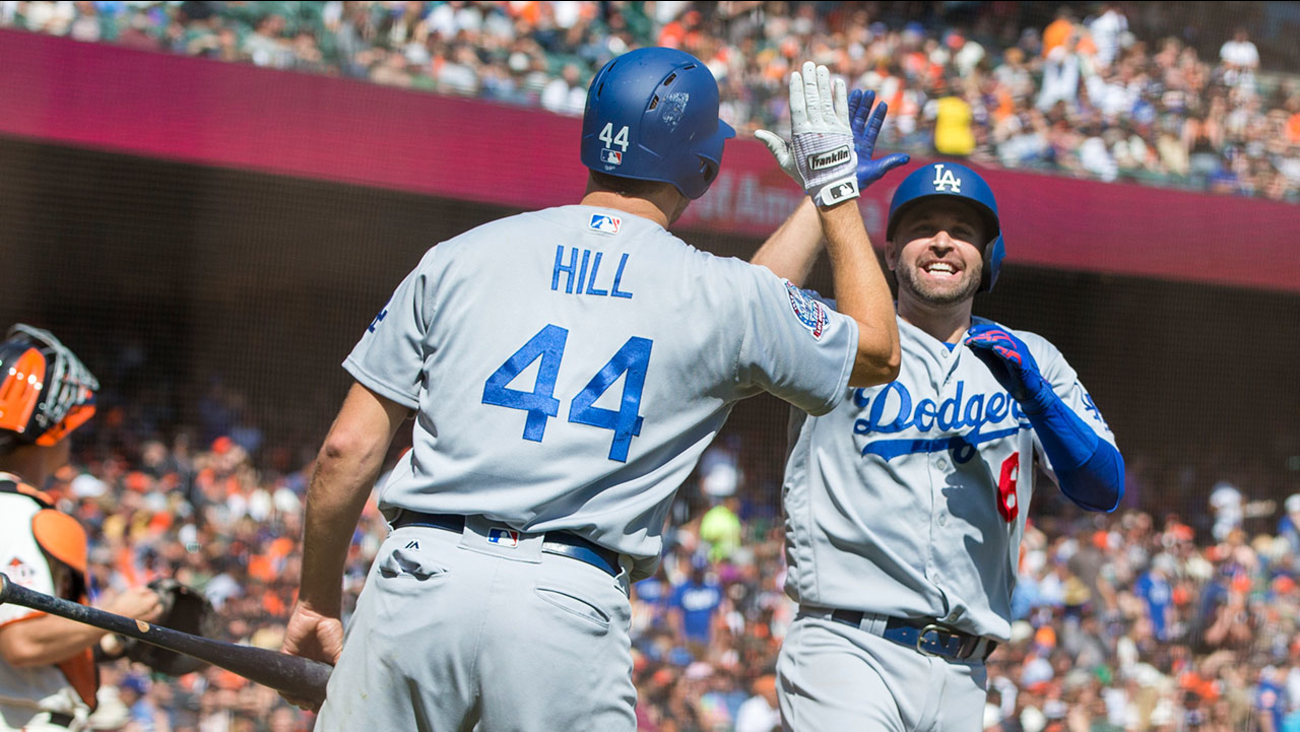 Dodgers Brian Dozier celebrates with Rich Hill after he hit a two-run home run against the Giants in the third inning of a baseball game in San Francisco, Sunday, Sept. 30, 2018. (AP Photo/John Hefti)

SAN FRANCISCO (KABC) -- Justin Turner and the free-swinging Los Angeles Dodgers headed for a one-game showdown against Colorado to determine the NL West champion, jumping on the San Francisco Giants from the start Sunday in a 15-0 win for a weekend sweep.

The Rockies routed Washington 12-0 at Coors Field, setting up a tiebreaker at Dodger Stadium on Monday. The winner will get the division, the loser will go to the NL wild-card game Tuesday.

Walker Buehler was set to start for the Dodgers (91-71) as the defending NL champions try for a sixth straight West title.

Rich Hill (11-5) pitched two-hit ball for seven innings to keep the playoff-bound Dodgers on a roll.

Manny Machado, Matt Kemp and Max Muncy all joined the hit parade as Los Angeles left nothing to chance in Game No. 162. Kemp had a two-run double and RBI single among his three hits.

Los Angeles followed up an 18-hit performance Saturday with 16 more to finish with 43 in the three-game series.

Chris Taylor drew a walk from Andrew Suarez (7-13) to begin the game, Turner followed with an RBI double and the rout was on. Brian Dozier's two-run homer and a two-run double by Kemp highlighted a seven-run third inning.

The Dodgers clinched baseball's final playoff berth by beating the Giants 10-6 on Saturday and celebrated with champagne in the visiting clubhouse - then all attention turned to winning another division crown.

So manager Dave Roberts switched from Buehler to Hill (11-5), who delivered. He completed a 5-0 September and won for the sixth time in seven outings beginning Aug. 24. The lefty retired the first 10 batters in order before Joe Panik's single in the fourth.

Los Angeles needed a stellar showing in its final series.

The Dodgers fell out of the division lead with a 7-2 loss Wednesday at Arizona before taking all three from the injury-plagued Giants (73-89) to close out the final weekend of the regular season.