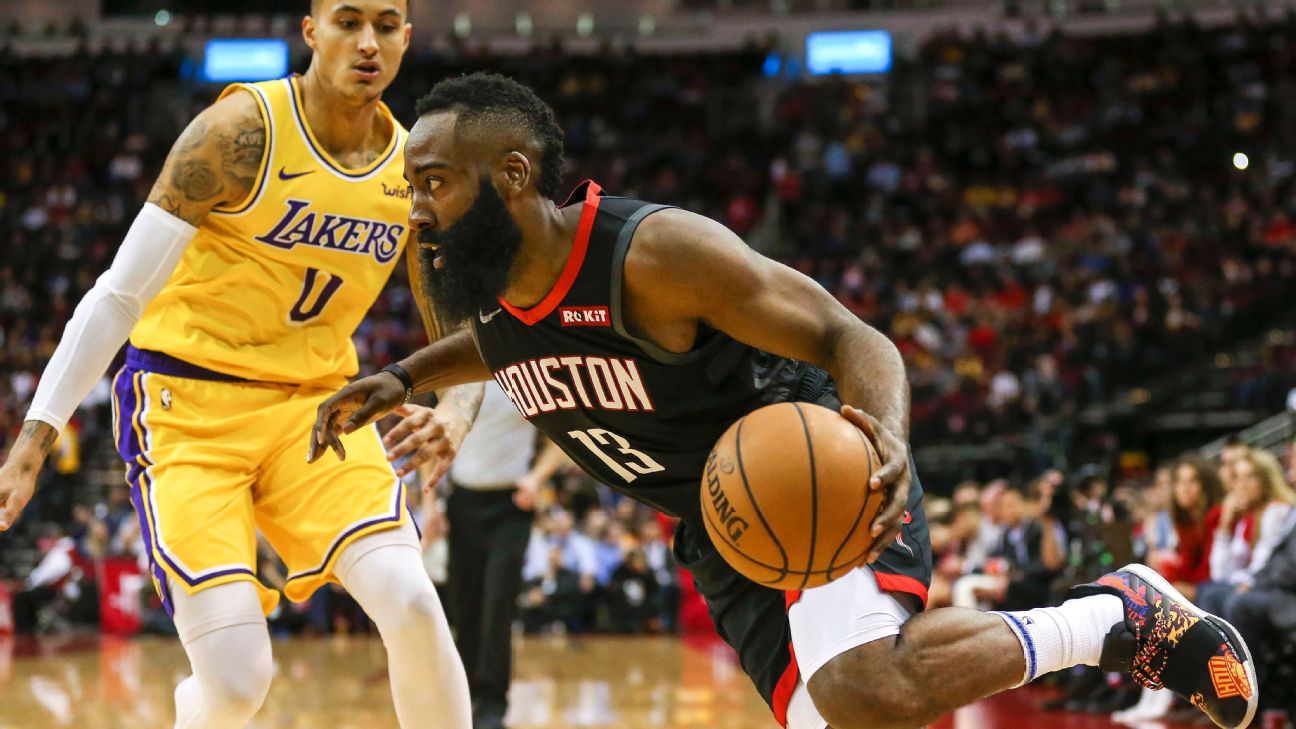 HOUSTON -- With reigning MVP James Harden having scored 57 and 58 points, respectively, in his past two games, Lakers coach Luke Walton has a modest defensive goal for his team heading into Saturday's game against the Houston Rockets.

"If we can keep him anything under 50, we feel like we've succeeded as a group," Walton said with a wry smile after shootaround Saturday morning. "If he scores over 50, then the game plan did not work."

Harden, averaging a league-best 35.4 points per game, has scored 30-plus points in 18 straight games, mixing in three 50-point games and eight 40-point games. Houston has gone 13-5 in that stretch to climb to the No. 6 spot in the Western Conference heading into Saturday's game (8:30 p.m. ET, ABC/ESPN App).

The last time the Lakers played the Rockets, of course, they had LeBron James in the lineup. He scored 29 points on 12-for-18 shooting.

James isn't with the team in Houston this time around, staying back in Los Angeles to continue to rehabilitate the strained left groin that's caused him to miss the past 12 games.

L.A. has gone 5-7 without James -- and without Rajon Rondo, who has missed the same amount of time after undergoing surgery to repair a ligament in his right ring finger -- but things are looking up.

Not only have the Lakers won their past two games without the pair of accomplished vets, including a 138-128 overtime victory on the road against the Oklahoma City Thunder on Thursday, but James' and Rondo's returns could be right around the corner.

Both have been cleared to resume full-contact practice, and Walton said he plans to organize that practice Sunday in El Segundo when the team returns from its two-game road trip.

"We're hopeful to have both of them," Walton said. "It will be determined [Sunday]. I don't know what LeBron is doing today as far as how aggressive his on-court stuff will be. But depending on how he feels later today, tomorrow morning will be dependent on how much he does in the practice we have tomorrow. And Rondo will be pretty much full going tomorrow."

James was cleared Wednesday, but the team left for Oklahoma City that day without practicing before their flight. Rondo was cleared Friday and played in informal half-court 3-on-3 and full court 4-on-4 games in Houston.

Even with the positive practice development, Walton was reticent when asked if James and Rondo could be back in the lineup Monday when the Lakers host the Golden State Warriors on Martin Luther King Jr. Day.

"Call it 'hopeful,'" Walton said. "Of course I'm hopeful, but I don't anticipate, I wouldn't anticipate either one of them playing Monday."