Lakers want to 'make a splash' 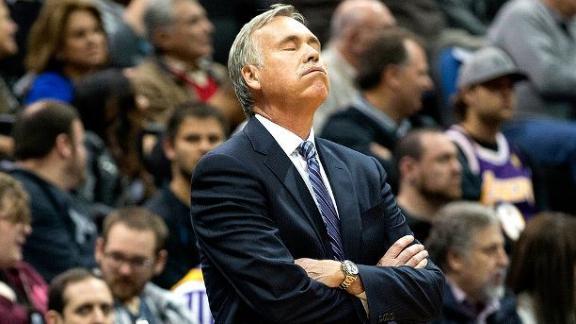 The Los Angeles Lakers plan a drawn-out and exhaustive search for Mike D'Antoni's successor as coach, but sources close to the process insist the team hopes to "make a splash" with its eventual hire.

To that end, sources say, Lakers officials intend to reach out to two of the biggest names in the college game -- UConn's Kevin Ollie and Kentucky's John Calipari -- to at least gauge their interest in the job.

The Lakers also plan to reach out to the Chicago Bulls for permission to interview coach Tom Thibodeau, a source told ESPNLosAngeles.com's Dave McMenamin. The Lakers are closely monitoring the playoffs, believing that several viable candidates could become available should their respective teams be eliminated.

The Lakers' immediate aims, sources say, are to focus on the draft and free agency, and to "hold back [on the coaching front] until they get a better sense of the marketplace."

Another factor in the team's thinking, sources say, is leaving the position open in the short term in case a potential free-agent target such as LeBron James or Carmelo Anthony tells team officials in July that he would consider coming to the Lakers if the coach of his choosing is hired.

The Lakers are not expected to pursue Duke's Mike Krzyzewski this time, not after having unsuccessfully tried to lobby the longtime Blue Devils coach to leave Durham in the past.

Whoever takes the job will have his hands full: The Lakers are coming off a dreadful 27-55 campaign that was marred with injuries and the specter that a major roster overhaul wouldn't take place until the summer of 2015.

Ollie's close relationship with Oklahoma City star Kevin Durant is well known around the league and bound to make the young coach of the newly minted NCAA champions a target of any team with aspirations of trying to lure Durant from the Thunder in free agency in 2016.

Sources say Derek Fisher, who came into the league alongside Kobe Bryant in 1996-97 and currently is Durant's teammate in Oklahoma City, will also be considered if he's indeed interested in making the immediate jump to coaching. Fisher has maintained for months that this will be his final season as a player and is believed to prefer a front-office career to coaching, but his relationship with the Lakers is such that Fisher has to be considered a viable candidate for the bench.

To this point, sources say, Bryant has not made any coaching suggestions, but the Lakers are expected to consult the 35-year-old star on the matter as he prepares to return from a 2013-14 season in which he was limited to six games because of Achilles and knee issues. Bryant's two-year, $48.5 million extension will kick in next season.

The Lakers are also expected to look at the current NBA coaching ranks and consider a number of veterans and top assistants, so several more names are likely to surface as the search unfolds. D'Antoni resigned on Wednesday night after reaching an impasse with the Lakers, who resisted his push for the team to pick up his 2015-16 option, something D'Antoni felt would allow him to coach with more authority next season.

In terms of other potential candidates, Lakers officials have long held ESPN analyst Jeff Van Gundy in high regard. They also, according to sources, plan to again interview former Lakers and Clippers coach Mike Dunleavy, who was considered for the job in the wake of Mike Brown's dismissal, when the Lakers ultimately opted for D'Antoni over Phil Jackson and Dunleavy.

It's believed that Byron Scott and Kurt Rambis, both former Lakers from the team's 1980s glory days, will be considered as well. Scott has been working as a studio analyst on Lakers broadcasts since his 2013 dismissal by the Cleveland Cavaliers; Rambis has already had one stint as Lakers coach and is still under contract to the team for next season after serving as an assistant to D'Antoni last season.