"We learned today of LiAngelo Ball's intention to withdraw from UCLA. We respect the decision he and his family have made, and we wish him all the best in the future," UCLA men's basketball head coach Steve Alford said in a statement.

LaVar Ball, meanwhile, confirmed to ESPN that LiAngelo will not be attending another university. "He's not transferring to another school," he said. "The plan is now to get Gelo ready for the NBA Draft."

LiAngelo Ball is one of three UCLA basketball players who were indefinitely suspended following a shoplifting incident in China.

Ball, freshmen Cody Riley and Jalen Hill were arrested while their team was in China for their season opener.

All three players were allowed to return to the United States after President Donald Trump, who was already in Asia on a trip, said he spoke to President Xi Jinping of China about the incident.

The three issued public apologies after returning to the U.S.

The players also expressed gratitude to Chinese authorities and to President Trump for intervening on their behalf.

LaVar Ball, however, questioned the extent of Trump's involvement in securing his son's release from Chinese custody during a combative 20-minute CNN interview.

This set off a feud between LaVar Ball and the president that played out mostly on Twitter, where Trump called the outspoken basketball dad "an ungrateful fool" and a "poor man's version of Don King."

It wasn’t the White House, it wasn’t the State Department, it wasn’t father LaVar’s so-called people on the ground in China that got his son out of a long term prison sentence - IT WAS ME. Too bad! LaVar is just a poor man’s version of Don King, but without the hair. Just think..

...LaVar, you could have spent the next 5 to 10 years during Thanksgiving with your son in China, but no NBA contract to support you. But remember LaVar, shoplifting is NOT a little thing. It’s a really big deal, especially in China. Ungrateful fool!

As part of their indefinite suspensions, the players haven't been allowed to suit up, practice or travel with the Bruins. Ball is a freshman who hasn't played a game for UCLA yet.
Report a correction or typo
Related topics:
sportsuclaschoolucla bruins
Copyright © 2021 KABC-TV. All Rights Reserved.
RELATED 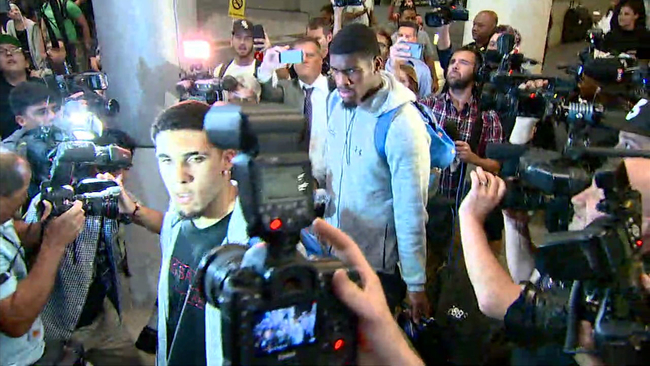 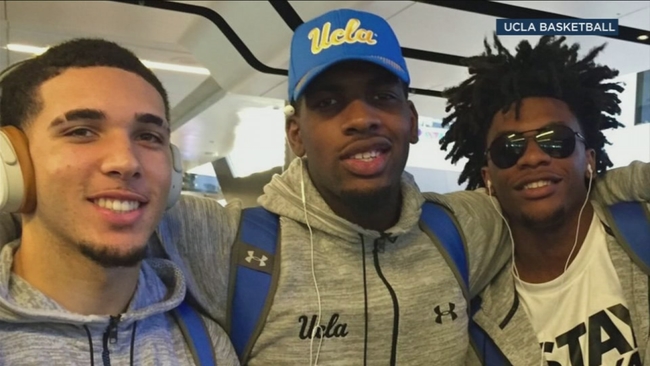