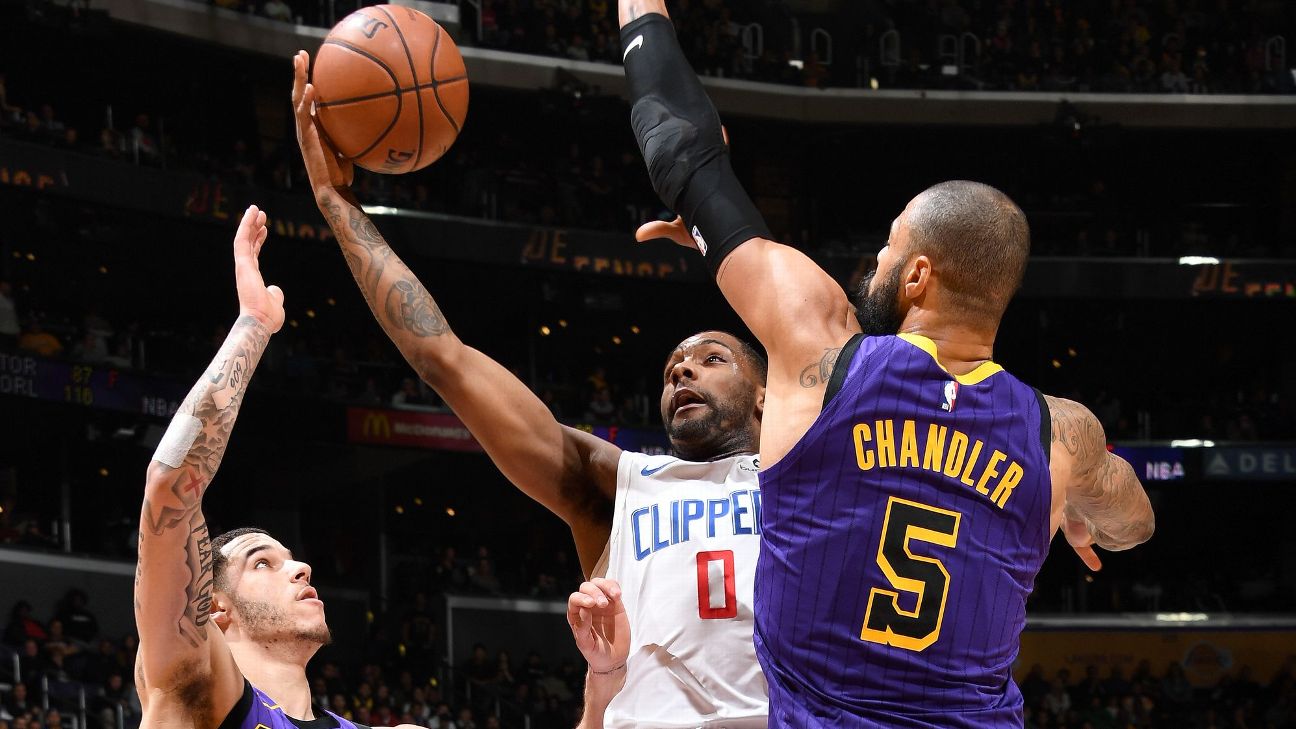 LOS ANGELES -- Just days removed from theLakers' biggest win of the season -- a rout of the Golden State Warriors on their home court on Christmas Day -- the team dropped its second straight game, and it caused a crack in their team camaraderie.

"I felt like we kind of started to splinter a little bit while it was happening," Lakers coach Luke Walton said of theLA Clippers' 22-0 run that propelled them to a 118-107 win over the Lakers on Friday night. "That can't happen. We can lose games, but we'll lose them together. When we win them, we'll win them together. No matter what's happening on the court, we have to stay together and keep working and figure it out."

The Lakers' past two losses came without LeBron James, Rajon Rondo and JaVale McGee -- three of their key veterans. James' teams have now lost 13 straight games when he hasn't played, according to data compiled by ESPN Stats & Information.

James, who came into Staples Center drinking a glass of red wine, was on the bench for Friday's game in street clothes, as were Rondo and McGee. Although the trio was still vocal as the Clippers erased a 10-point deficit midway through the third quarter to run away with the victory, Lakers point guard Lonzo Ball said it was different than talking to them on the court when they're also in uniform.

"They were trying to talk to us in the best way they could, but it's not the same as them being out there," Ball said. "So we just got to step up and accept the roles that we're coming into right now."

The roles of Ball, Brandon Ingram and Kyle Kuzma, in particular, have increased since James' groin strain and Rondo's second hand surgery of the season sidelined the Lakers' most ball-dominant players.

Kuzma led the Lakers with 24 points against the Clippers but went 0-for-7 from 3 and had four turnovers.

Ball, who had 20 points in the Thursday's loss at theSacramento Kings, had 19 on Friday, giving him his highest-scoring two-game stretch of the season. However, he also had four turnovers.

Ingram scored 17, but he went 6-for-12 from the free throw line a night after he spoiled a 22-point effort against the Kings by also coughing up five turnovers.

All three agreed the finger-pointing, or "splintering," as Walton termed it, has to stop.

"We can't be a front-running team," Kuzma said. "When things are up, we can't just all be happy, and then when things are down, we're just separate from each other. So the biggest thing for us is just to always be together. Every team has rough patches in a season. And we've been down bodies all year, different lineups. And we can't let those things affect us. It's all about us sticking together and just keeping it like a fist."

Kuzma clasped his hand as he finished his answer to show the tightness he expected from the group.

"I mean, guys were getting frustrated," Ball added. "Anytime a team goes on a 22-0 run, it's not going to be all fine and dandy. We got to regroup. We can't argue with each other. We're on the same team."

Ingram offered an alternative perspective, however, rationalizing that they wouldn't be fighting if they weren't all after the same thing.

"Whether it was bringing the ball up court, trying to get open to run a set, they were pushing us off our spots, and we let that happen," Walton said. "We know that's going to happen. We're playing five 20-year-olds. Being a vet in this league, this being a man's league, you see young guys [and] you go after them physically. We talked about it after the game. That's going to happen. It's going to happen again each and every night we step out, until we're ready to fight back."

The Lakers are 2-5 in their past seven games. That's the same record they opened the season with, prompting team president Magic Johnson to dress down Walton in an explosive meeting.

With Rondo expected out another four to five weeks, and James' return date still unknown, the Lakers will have to rely on those 20-somethings to get back on track.

Asked to compare the current state of the team with its early-season struggles, Ball said he thought it's "a little different."