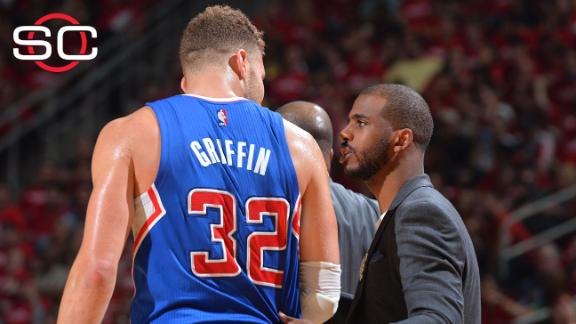 After going through an on-court workout on Thursday and a shootaround on Friday, Paul told teammates he plans to play in Friday's game.

"He said he's playing tonight," Barnessaid Friday after going through shootaround with Paul. "You just hope that he's ready. His game is so much stop-and-go, and he's such an integral part of our team. I hope he can stay healthy throughout the game because we're going to need him for this run."

Paul is officially listed as questionable for Friday's game with a hamstring injury. He and coach Doc Rivers did not address reporters after Friday's shootaround.

"I told him tonight, I expect the CP that I'm going to see at 50 at the YMCA," Barnes said. "Like an older Mark Jackson out there, controlling the sets, running the team, coming off pick-and-rolls and making plays, but still picking and choosing his spots. He was definitely hurt in Game 7 and he had a lot of adrenaline going and carried us offensively, so we'll have to see what he has in store for us tonight."

Paul averaged 19.1 points, 10.2 assists and 1.9 steals per game this season. This was the first time in his 10-year NBA career that he started all 82 games during the regular season.