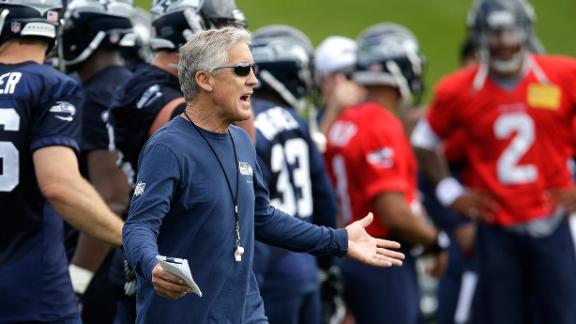 The Seattle Seahawks and coach Pete Carroll have been collectively fined more than $300,000, according to sources, and will lose two double practices in 2015 as ruled by NFL commissioner Roger Goodell for violating no-contact rules that govern NFL teams' offseason practices.

Carroll's fine was at least $100,000 and the Seahawks were docked over $200,000 while the team will lose at least two minicamp practices next season because it had excessive contact between players during a June 18 practice, per sources.

The NFL confirmed the loss of two practices, but said the team will be allowed one practice session on the final day of its minicamp.

The Seahawks had been fined an undisclosed amount in 2012 by Goodell for a similar violation under Carroll's supervision and lost their final two organized team activities practices, sources added.

The 2011 collective bargaining agreement bans physical contact between players during the offseason.

A Seahawks spokesman declined immediate comment, as did a league spokesman.