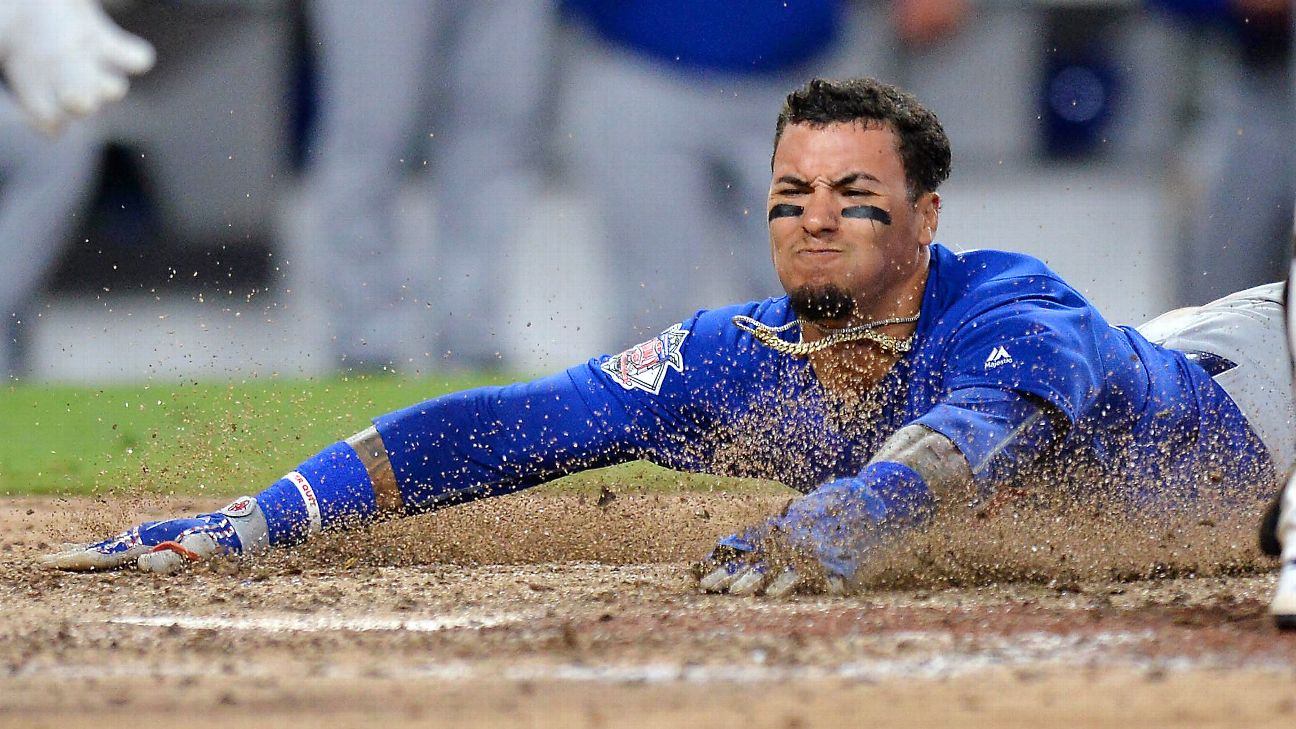 A group of MLB players led by Cincinnati Reds pitchers Trevor Bauer andDavid Carpenterare trying to organize a sandlot baseball game in Arizona to pass the time with spring training and the 2020 season on hold because of the coronavirus outbreak. So we decided to give them a little help picking their squads by asking some of our ESPN MLB writers to pick the one player they would choose first in the ultimate All-MLB sandlot game.

Our ground rules were simple: a first-come, first-served draft with a reason backing each pick and some sandlot-style trash talk about the previous selection -- here's who went off the board.

Why I took him: One of the most athletic players in baseball who can play outfield, infield (having come up as a second baseman) and has a cannon for an arm, so maybe can throw an inning or two. There's going to be clamors for Mike Trout here, but I think Betts embodies the spirit of sandlot baseball with his style of play. He is as close as we'll get in real life to the skill set of the legend Pablo Sanchez from Backyard Baseball. -- Joon Lee

Why I took him: With no umpires, there's no real point getting somebody with any plate discipline. Baez already swings more than any top player in the game, so he's going to have the advantage over players who can only draw walks and hit pitches down the middle. And, like Betts, he can play any position, and has the arm to pitch or catch.

Why he's a better pick than player above: I'm assuming streetball is a decent comp for sandlot baseball. More than Betts (or anybody else), Baez's highlight reel of lightning-fast tags, hyperaggressive baserunning, throwing behind baserunners, etc. show the same imagination and creativity of a good ankle-breaker reel. -- Sam Miller

Why I took him: This is sandlot baseball. You know what that means: There's no five-man rotation. There are no platoons. It's just pick from the players who showed up at the ballpark that day and see which team is best. So I'll take the one guy on the planet who can hit the ball as far as anyone in the game at the plate and then unleash a 100 mph splitter from the mound.

Why he's a better pick than player above: Javy can hit. Javy can run. Javy can field. And yes, Javy can make really cool tags. But can Javy pitch like Shohei? Didn't think so. Ohtani it is. -- Dan Mullen

Why I took him: So with the fourth pick I get the best player in baseball -- I'm all over that. He might not be the flashiest or the most exciting, but he is the best and even on the sandlot I'm trying to win on. Plus, if my team ends up without someone to play anyone other position, does anyone really doubt that Trout could jump in and do the job.

Why he's a better pick than player above: How many times do I have to say that he's the best player in baseball? -- Peter Lawrence-Riddell

Why I took him: I'm imagining a tiny old sandlot field, and Alonso going deep again and again and again until finally it gets so dark that when he hits the final pitch far out into the trees no one even bothers to look for it; it's time for dinner, everyone heads home and the legend of the Polar Bear lives forever.

Why he's a better pick than player above: He's not better than Mike Trout because no one is better than Mike Trout. But the final scene of this fantasy is that much sweeter when, as the players scatter to the wind, Trout and Alonso are left on the field, and Trout -- who is three years older, a lifetime in sandlot years -- tips his cap to the new kid. -- Matt Marrone

Why I took him: OK, maybe I'm stretching the definition of "active player" here, but Ichiro played last year, he was in spring training as a coach with the Mariners and we all know he's not really retired. Anyway, in sandlot ball, you want players who can do everything and Ichiro can still pump it up to 90 mph on the mound and if I'm picturing sandlot ball like I played as I kid, I imagine a defense with about five or six fielders instead of nine -- meaning Ichiro will have all kinds of wide-open spaces to place the ball. He will bat 1.000.

Why he's a better pick than player above: But the main reason to pick Ichiro goes beyond that. We start playing after breakfast. The game goes all day. Except Pete Alonso will want to go home and grab some lunch or dinner. Mike Trout will probably want to take a break to go watch The Weather Channel. Shohei Ohtani is great, but do you think his arm can handle 10 hours of pitching? No way. Ichiro, however, will play all damn day. You will not take the ball from his hands. Last man standing wins. Game over. Ichiro forever. -- David Schoenfield

Why I took him: He's fast. He can run down everything in the outfield. He can steal bases. He can hit the ball a mile. He's young and able to play all day. No umpires, so plate discipline isn't going to be a thing. His development shows how quickly he adapts to new settings. And because he's a rookie, Robert is hungry to show he can hang with the stars taken ahead of him. Also, I just really want to watch him play.

Why he's a better pick than player above:I prefer someone who has actually played a lot of sandlot-style baseball. (Disclaimer: I don't actually know that Robert did this. He turned pro in Cuba when he was 16, so one has to assume he played a lot of baseball before that.) Robert might not be the best player in baseball, but in a sandlot setting, he'd show why he might be someday. -- Bradford Doolittle

Why I took him: His swing is the most fun to watch in baseball. That's my No. 1 criteria, but instead of throwing a bunch of scouting mumbo-jumbo or surface stats at you, I'll give you guys the real nerd stuff. Bellinger is in the top 20% of all big leaguers at all eight major measures that are on the player pages at Baseball Savant, which include analogs for raw power, in-game power, defensive ability, speed, and overall offensive performance. He can also play at least four positions. Versatile, elite, fun to watch.

Why he's a better pick than player above: He has actually played well in the big leagues before, at multiple positions, including the one Robert will try to play. -- Kiley McDaniel

Why I took him: Y'all really let the game's most dynamic player slip to me at No. 9? This is a walking 40-40 guy we're talking about here. We might not be playing with a fence. This dude can crank one into the gap and leg out an inside-the-park home run with regularity. And he's going to run down a bunch of balls in what might be an endless center field.

Why he's a better pick than player above: Two words: Stolen bases. Bellinger is fast, but he hasn't mastered the art of swiping bags the way my guy has. Acuna has racked up 53 stolen bases in his first 267 games -- in an era when guys aren't really stealing bases. On a sandlot field, devoid of run-expectancy charts, he's going to go nuts. This is a steal. -- Alden Gonzalez

Why I took him: What's not to like? He's fast, he's powerful, he can field and he plays at max effort. Heck, I'm sure that if he knocks one over the fence, he'll fetch that ball back from Hercules, lickety-split, no need for a cross-town race. Best yet, you won't have to pinch-run him at third base, he'll leg out the triple, then steal home all by himself! (Still my second least-favorite baseball movie ending, behind only The Scout.)

Why he's a better pick than player above: How many of these other guys can do all of these things and play shortstop? Tatis might be the only guy on here who can probably slide into any field position, and I'd bet he could even pitch, with that arm of his. -- Tristan H. Cockcroft

Why I took him: Sandlots don't have a batter's eye.

Why he's a better pick than player above: I'm really going to miss watching Fernando Tatis Jr. play as we ride out this mess, but you're telling me that I get the best pitcher in the world with the 11th pick? In this time where generosity is of the utmost import, it's heartening to see my colleagues offering such munificence. -- Jeff Passan 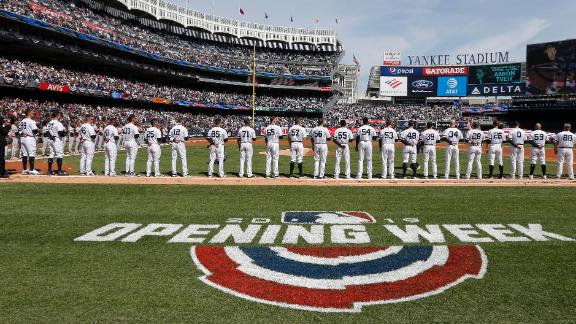