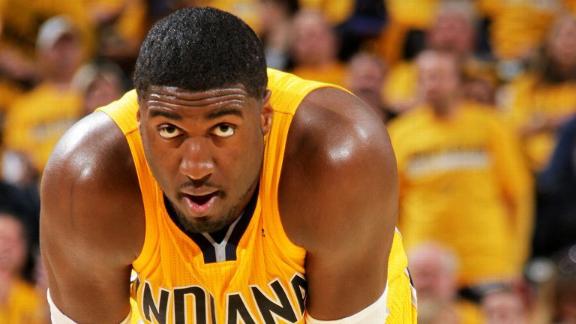 The Indiana Pacers appear to be fed up with their disappearing big man.

Following a zero-point, zero-rebound performance in a 102-96 Game 1 loss to the Washington Wizards, All-Star center Roy Hibbert was pulled aside by teammates David West and Rasual Butler, according to a report on the team's website.

Though the site described West as "fuming" and "as heated as he's ever been," all parties declined to comment on the conversation that took place.

West told reporters the team plans to "keep encouraging" Hibbert and that Hibbert has to "be a part of the fight."

"We're at the point where we really need Roy and we need him now," George said following Monday's loss.

The Pacers, who stumbled down the stretch of the regular season and had to rally from a 3-2 series deficit in the first round, hoped Hibbert had pulled himself out of his funk after he had 13 points, seven rebounds and five blocks in a Game 7 win Saturday over the Hawks.

However, a game in which Hibbert had more fouls (five) than he had points, rebounds, assists and blocks combined (three) over 18 minutes has the 7-foot-2 center again on the defensive.

"I got to come out and be aggressive," Hibbert said Monday night. "I got to be a different Roy Hibbert than I have been."

The Wizards outrebounded the Pacers by a 53-36 margin in Game 1, a discrepancy George hopes Hibbert can help resolve.

"[It] comes down to us having heart and rebounding the ball," George said. "We need our big fella to rebound the ball for us."

"I'm going to change some things up for the second game," said Hibbert, who took only two shots in Saturday's loss. "I'm going to look within myself and go out there and figure it out."

Game 2 is Wednesday night in Indianapolis.