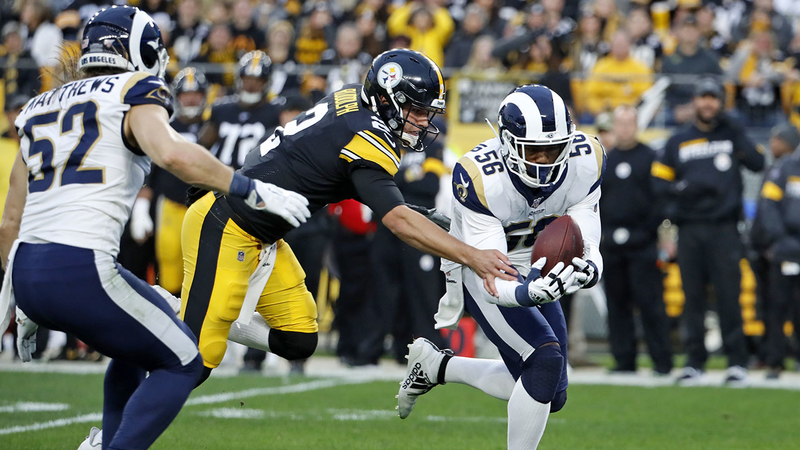 The Steelers forced four turnovers - including a 43-yard fumble return for a touchdown by safety Minkah Fitzpatrick - in an ugly 17-12 victory on Sunday that pushed their winning streak to four games and dealt the Rams' chances of chasing down Seattle and San Francisco in the NFC West a serious blow.

Donald, a Pittsburgh native, sacked the Steelers' Mason Rudolph for a safety in his first appearance in his hometown since the Rams took him in the first round of the 2014 draft.

Linebacker Dante Fowler scored Los Angeles' lone touchdown on a 25-yard fumble return on the second snap of the game. But the Rams' offense did little against a Steelers defense that has become the team's identity after losing Ben Roethlisberger to a season-ending right elbow injury in Week 2.

Jared Goff completed 22 of 40 passes for 243 yards, none of them to leading receiver Cooper Kupp. The Rams (5-4) converted just 1 of 14 third downs and came up empty on a pair of last-gasp drives in the final two minutes. Goff's fourth-down heave to the end zone intended for Josh Reynolds fell incomplete with 1:25 to go. Los Angeles got the ball back with 59 seconds to play but Goff's pass to Robert Woods was tipped.

Fitzpatrick ran underneath it for the game-sealing interception and seventh takeaway since the Steelers acquired him from Miami in September for a 2020 first-round pick.

At the moment, it looks like draft capital well spent.

Rudolph completed 22 of 38 passes for 242 yards with a touchdown, stats that would have been considerably better if not for a handful of drops that prevented the Steelers (5-4) from gaining any sort of traction for long stretches.

Rudolph became the ninth quarterback since the 1970 merger to throw a touchdown in each of his first seven games when he found James Washington for a 3-yard score in the first quarter, but the Steelers once again relied on their defense to move over .500 for the first time this season.

The Steelers managed just 15 turnovers in 2018. They have produced 26 through nine games in 2019, helping them stay afloat following a 1-4 start while Rudolph and the offense searches for solid footing.