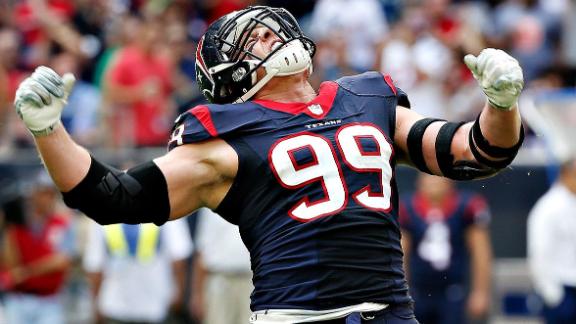 In a somewhat surprising move, one of the NFL's most marketable players has chosen to sign with a shoe and apparel company that doesn't have rights to put its logo on the field.


Houston Texans defensive endJ.J. Watt, the league's Defensive Player of the Year, has signed a deal with Reebok to make his on-field shoe, which will go unbranded during games, and to outfit him during his intense training and workout regime. Terms of the deal weren't immediately available.


Reebok's parent company, Adidas, has the right to put its logo on its endorsers on the field, but Reebok does not.


Watt announced the deal on social media Monday morning, along with a video of him breaking his personal record in the box jump, reaching a height of 5 feet, 1 inch in the company's ZPump Fusion shoes.


Reebok is using Watt as one of the faces of its "Be More Human" campaign, even though many consider the 6-foot-5, 290-pounder to be the player most likely to have jumped out of a comic book. Last year, he scored five touchdowns and had 20 sacks.


"Kids treat athletes like superheroes and make you a role model," Watt told ESPN.com. "It's extremely important to me to remind kids that I was in their shoes and I was just like them and I accomplished what I did because I worked hard to pursue to my dreams."

Watt, who finished second in the league's MVP voting to Green Bay Packers quarterback Aaron Rodgers this past season, came to Reebok from Nike. The world's largest shoe and apparel brand, which makes the uniforms for the NFL, produced a limited edition "Mega Watt" shoe in May 2013, but it was too little, too late.


This deal, Watt said, allows him to be more in control of what he wears. He said has been working with Reebok to tweak his cleats to better address strengths and weaknesses.


"My body is everything," said Watt, who signed a six-year extension with the Texans before last season that will guarantee him nearly $52 million. "The equipment I use is everything."


Watt, whose Facebook page has more than 1 million likes, and has 775,000 followers on Twitter and nearly 747,000 followers on Instagram, said social media will allow him to tell more of his training story.


"With Twitter, Instagram and Facebook, the entire world can see a great video and spread it so quickly," Watt said. "I hope to inspire people to do extraordinary things."


While many post videos of workouts or drills to get attention, Watt, whose foundation registered the trademark "Dream Big, Work Hard," said the exercises to him are just a means to go further.


"I don't flip tires just to be a tire flipper and I don't do a box jump just to say I can jump on boxes," said Watt, who has been training at the same gym in Wisconsin since his sophomore year in high school. "I do it because it makes me a better player and a better athlete."


Reebok has tried to establish relevance for the brand recently by exploiting sports that aren't completely mature businesses. The company counts UFC fighters Ronda Rousey and Jon Jones as endorsers and sponsors reigning CrossFit Games champion Rich Froning, who has a signature shoe.


Watt, whose other endorsement deals include Gatorade, American Family Insurance and H-E-B, won't be the only member of the Texans' defense without a logo on his cleats. Jadeveon Clowney has a shoe and apparel deal with Puma, which also doesn't have league rights.