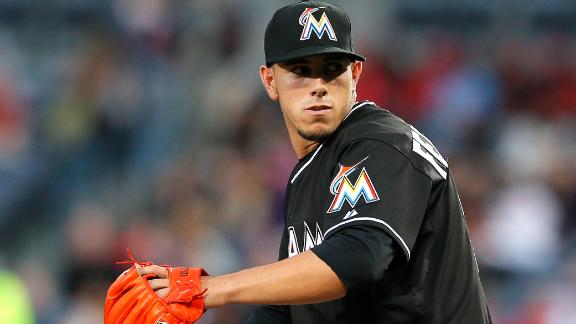 Miami Marlins ace Jose Fernandez has a torn ulnar collateral ligament in his right arm and needs surgery, according to a sourced report Tuesday.

CBSSports.com reported that Fernandez, who was placed on the 15-day disabled list with a sprained right elbow Monday, will get a second opinion from the Marlins' team doctor after another physician discovered a tear in the UCL in his pitching arm and recommended surgery.

A source familiar with Fernandez's elbow issues declined to confirm the torn UCL diagnosis to ESPN.com, but said that Fernandez has further doctors visits planned and that the situation "isn't promising medically."

Matt Harvey and Stephen Strasburg are other All-Stars who have had the ligament-transplant operation, which can take 12 to 18 months for recovery.

Fernandez's fastball averaged 94.6 mph over his first four innings in his most recent outing against the Padres but only 90.7 mph over his last two, according to ESPN's Stats & Information. He allowed four runs in the sixth inning before being removed with nobody out.

Last season Fernandez made 28 starts, going 12-6 with a major league-best .182 opponents' batting average. His 2.19 ERA was second in the majors behind three-time defending ERA champ Clayton Kershaw. Fernandez struck out 187 batters and was named NL Rookie of the Year.

Information from ESPN MLB Insider Buster Olney, ESPN's Jerry Crasnick and The Associated Press was used in this report.

Report: Fernandez Has Torn UCL
Leo Mazzone reacts to the increase in Tommy John surgery for pitchers this season.

Sources: Fernandez May Require Season-Ending Surgery
Chris Singleton discusses the impact on the Marlins if Jose Fernandez needs to have season-ending elbow surgery.