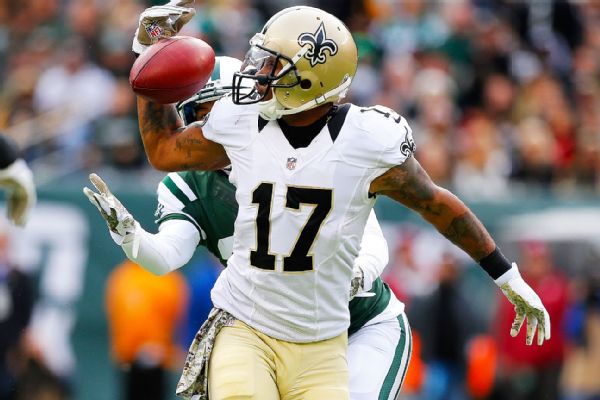 Meachem, 32, can be released once $100,000 has been paid to his ex-wife, Andrea Rhodes. The couple divorced in 2015 and agreed to split custody of their two children.

The New Orleans Advocate reported that a judge ruled Meachem owed $588,000 and had paid only about $200,000. Meachem made more than $20 million in his eight-year career.

But according to the Advocate and NOLA.com, Meachem testified that he believed much of his money had been taken by a former officer of one of his charitable foundations and another assistant, since he didn't pay enough attention to his bank balances.

Meachem said he had to borrow money from former NFL associates to get by.

According to NOLA.com, an attorney for Meachem's ex-wife claimed in a previous hearing that Meachem secretly took millions out of their joint accounts. Meachem was also fined $500 for failing to produce an assistant in court to testify about his finances. A judge also denied Meachem's request for a new trial.

Meachem, a first-round draft choice out of Tennessee in 2007, played a key role as a deep threat on the Saints' 2009 Super Bowl championship team. He had 178 catches for 2,914 yards and 29 total touchdowns in his career -- plus one touchdown in the playoffs.