Ryan Tannehill ruled out against Steelers with knee sprain 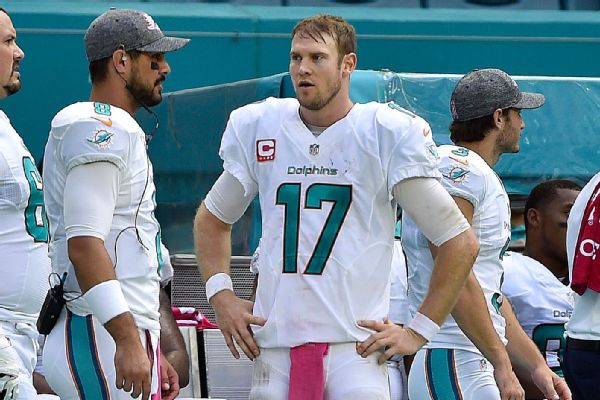 With Tannehill out, backup Matt Moore will start for the fourth week in a row.

The Dolphins apparently determined that Tannehill wasn't ready to return from a sprained ACL and MCL in his left knee suffered in Week 14. Coach Adam Gase said Wednesday that it was unlikely that Tannehill would play and that Moore was preparing to start.

"Unless something changes drastically here in the next two days or three days, he's going into this thing as the starter," Gase said of Moore.

Moore, a 10th-year pro, is 2-1 as Tannehill's replacement and will make his first career postseason start. Moore has eight touchdown passes, three interceptions and a quarterback rating of 105.6, which is higher than Tannehill's career-best 93.5 this year.

Tannehill hadn't missed a game in five NFL seasons until he was sidelined against the Arizona Cardinals. He has never played in the postseason, and the playoff game will be Miami's first since 2008.

Gase said he needs to be smart with any decisions regarding Tannehill.

"He's frustrated because he wants to try to help," Gase said of Tannehill. "He wants to do anything he can to be a part of this. But at the same time, I have to be smart with what we're doing moving forward.

"I don't want any setbacks. I don't want to jeopardize, whether it be his career or next season, [by] putting him in a position where he can't defend himself on the field against a defense that's playing really well right now. We have to be smart as an organization."

ESPN's James Walker and Adam Schefter, and The Associated Press contributed to this report.