San Jose Sharks are beating the St. Louis Blues with their playoff formula of speed and more speed

Bruce Boudreau, while still coaching the Anaheim Ducks last month, was most afraid of one team entering the playoffs: the Sharks. He shared that with ESPN.com the day after the Sharks eliminated the Los Angeles Kings.

"Their speed," Boudreau reiterated Tuesday night via text message. "Their young guys have come so far this year."

The Sharks, you might argue, had no better tuneup for their Western Conference finals showdown with the St. Louis Blues than the team they beat in the opening round.

The Kings and Blues are two of the heavier teams in the West, and the speed that gave L.A. such headaches in the first round is now, through two games of the Western Conference finals, giving St. Louis issues as well.

"Similar," Kings head coach Darryl Sutter said via text message Tuesday night when asked about that comparison. "Blues probably deeper on the back end. Think it's going to be a long, even series."

Well, it probably will be, given that the two teams split the two opening games here, but the Blues are mighty lucky they're not down 2-0 with the series heading to San Jose on Thursday for Game 3.

They've been outplayed in two straight. They stole Game 1 but got a just result in Game 2.

"The first five periods weren't necessarily us," said Blues captain David Backes after the 4-0 loss Tuesday night. "We started to show some trends there in the third of what we do when we're successful, of getting pucks deep, getting in on the forecheck and being physical down below their goal line. But if we're going to try to play transition with their firepower and see who can skate faster and execute on 3-on-2s, that's not how we've won games in the playoffs, not how we've won games all season. Frankly, they've beat us at that game for five periods and had better chances. So that needs to be a lesson learned."

The Kings said this, too, in the opening round, about needing to establish their forecheck and create turnovers. Thing is, the speedier Sharks were too smooth on their defensive-zone puck retrievals to really get into that much trouble.

So far, through two games of the Western Conference finals, we're seeing the same. The Blues have been unable to consistently pound bodies in the Sharks' zone and force turnovers.

"Good breakouts," said Sharks blueliner Marc-Edouard Vlasic after the Game 2 victory. "Breakouts eliminate their forecheck, and they're a heavy forechecking team. Tonight we were able to spend most of the time in their end because of better breakouts. We turned the puck over a lot less."

Sharks center Logan Couture agreed with the Kings comparison, although he also feels the Blues have a more dangerous layer to them.

"They're also pretty good off the rush, they're better off the rush than people give them credit for," Couture said. "They've got a lot of skill. The [Vladimir] Tarasenkoline, they're very, very skilled together, and they can make plays off that rush. The other guys kind of forecheck back and use their big bodies. I think we've done a good job of breaking out. That's the biggest thing so far, D-men go back and make great plays and our forwards support."

Added Sharks captain Joe Pavelski: "Guys are doing a good job supporting the puck all over the ice, in all the zones. We've been responsible."

Speed. The Sharks looked a step ahead most of Tuesday night.

The challenge for the Blues as the series shifts to San Jose for Games 3 and 4 is that they need to rediscover how to impose their structured, detailed game on the Sharks in their own building. They were able to do that to the Dallas Stars on the road last round.

It begins with finding ways to sustain longer periods in the Sharks' zone. Easier said than done. 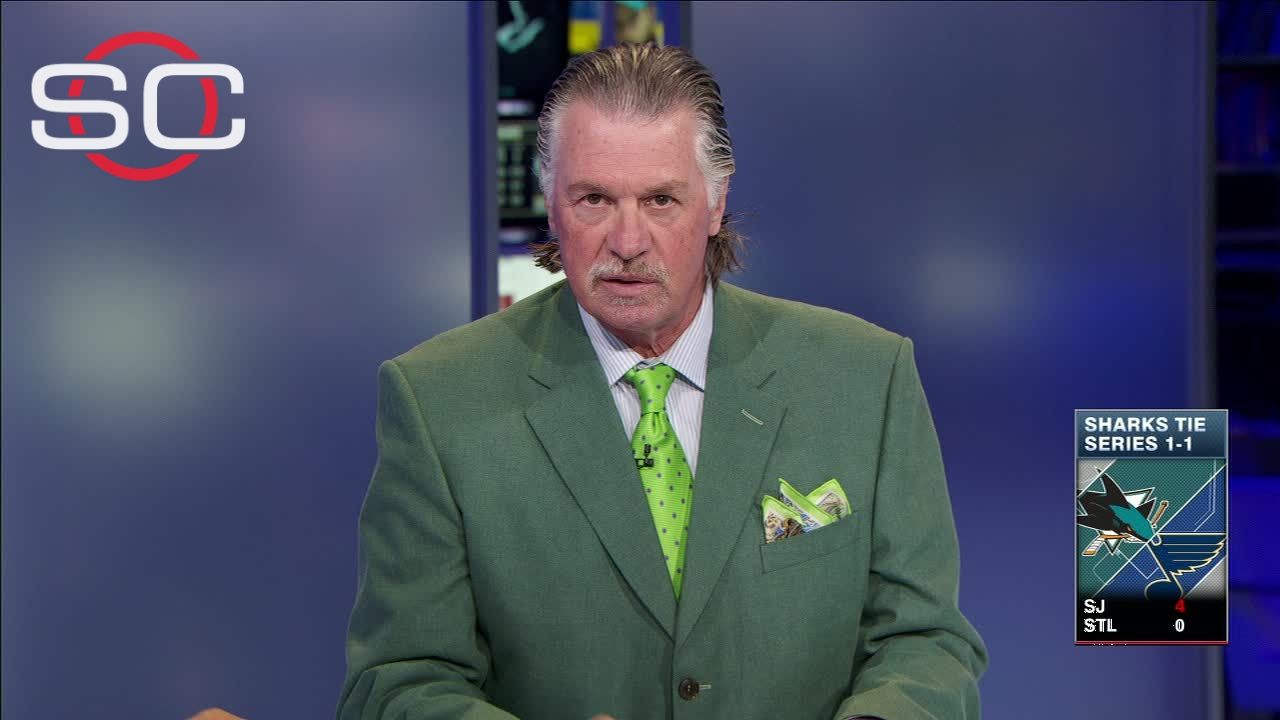 What would it mean for the Sharks or Blues to be in the finals?
Barry Melrose and Craig Custance discuss the impacts of making it to the Stanley Cup finals for San Jose or St. Louis.

Can two Joes make history in San Jose?
Barry Melrose and Craig Custance break down the importance of Joe Thornton and Joe Pavelski to the Sharks' road to the Stanley Cup finals.