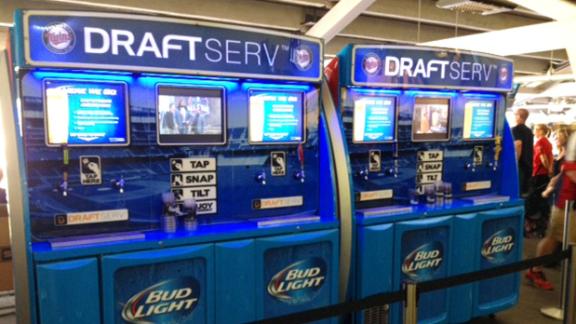 Self-serve beer stations are up and running in Target Field, so Minnesota Twins fans and those who attend the Major League Baseball All-Star festivities next week can decide what they want and even how much they want of it.

The machines, called DraftServ, are a partnership between concessionaire Delaware North and Anheuser-Busch.

"It's a way to engage with the customer and allows the fan to have greater control of what they're drinking," said Jerry Jacobs Jr., principal of Delaware North, whose Sportservice controls the concessions at 10 baseball stadiums, seven arenas that host NBA and NHL fans and seven NFL stadiums.

Fans attending Twins games can go to a cash register, show their ID and preload a $10 or $20 card. For the All-Star Game, a $50 card will be available.

Fans then scan the card at the machine and can choose between four beers and regulate how much they want to have poured.

"There's obviously some novelty value to this, but it also allows people to pour what they want," Jacobs said. "If they want half of a cup, that's all they will pay for."

Jacobs said the machine doesn't eliminate the need for labor. An employee will be at each one to check IDs if a person looks younger than 30 and to prevent any fan who appears inebriated from purchasing beer.

The machine allows a customer to use the card to pour up to 48 ounces of beer every 15 minutes.

Delaware North will also use the All-Star Game festivities to show off some new food items, including lobster corn dogs and a Hangover Burger, which features two hamburger patties with bacon, American cheese and a fried egg with mayo, ketchup and sriracha.