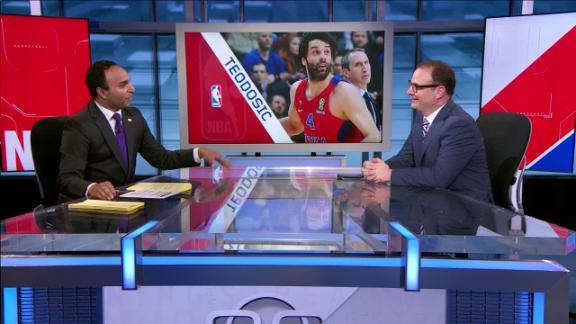 Serbian guardMilos Teodosic,one of the most flamboyant and creative playmakers in Europe,has agreed to a two-year, $12.3 million deal with the LA Clippers, league sources told ESPN on Thursday.

The deal includes a player option for the second year, league sources said.

"He might be the best passer in the NBA right now," new Clippers guard Patrick Beverleytold ESPN on Thursday. "His IQ for the game is different than I've ever seen. He's got a different swag about him. That boy can play."

Teodosic, 30, was willing to pay an expensive contract buyout with CSKA Russia to finally make the move to the NBA this season. Teodosic, who is 6-foot-5, has history with Beverley,playing with him in Greece and against him in Russia.

They're expected to often share time on the floor together for Los Angeles, which lost Chris Paul in a trade with the Houston Rockets.

"I think we really complement each other," Beverley said of Teodosic, a three-time EuroLeague first-team selection and a 2010 EuroLeague MVP. "I was his backup in Greece (in 2010), and we played against each other in Russia when he was the MVP. We've been like two brothers."

And to top it off, Beverley suddenly needs a new hotel alias on the road.

"I used Milos Teodosic" he confessed to ESPN on Thursday.

Teodosic drew high praise while leading Serbia to a near-upset of Team USA at the 2016 Rio Olympics and the final of the 2014 FIBA World Cup.

"As good a player, as good a guard, as there is in Europe,"Team USA coach Mike Krzyzewski said ofTeodosic.

With Moscow in 2016-17, Teodosic averaged 16.3 points and 6.5 assists while shooting 54.2 percent from the field and 38.6 percent from 3-point range. He led the team to the Euroleague Final Four in May, as several NBA teams -- including Atlanta, Brooklyn, Sacramento, Toronto and Utah -- were on hand to watch.

Teodosic was ranked No. 30 on the list of top available free agents this offseason compiled by ESPN's Kevin Pelton.