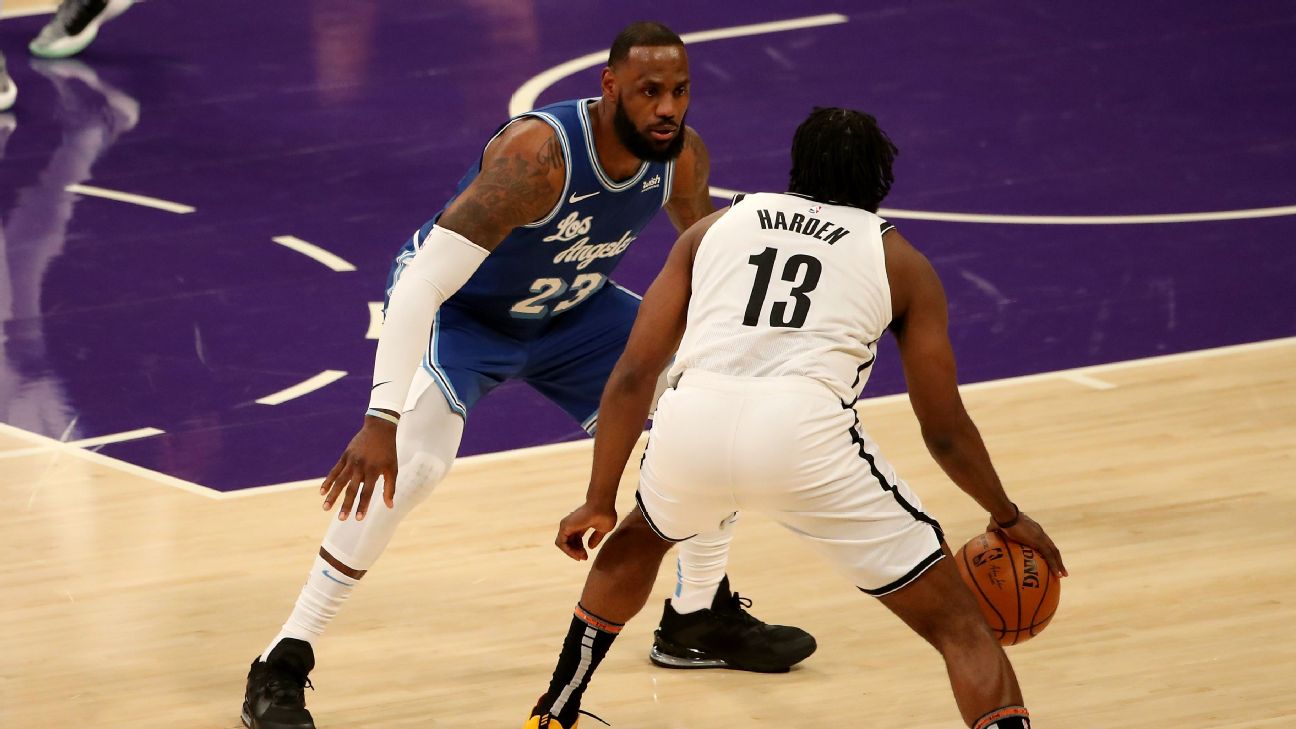 The Brooklyn Nets and Los Angeles Lakers entered Thursday night's game at Staples Center with plenty of star power, even with the Nets missing Kevin Durant and the Lakers without Anthony Davis.

Besides Davis, LeBron James and the Lakers were also without starting point guard Dennis Schroder. James faced Kyrie Irving, his former teammate, and Irving improved to 3-10 against LeBron. James Harden led the Nets with 23 points and 11 assists in Brooklyn's 109-98 victory. The Nets are now 10-1 against teams with a .500-or-better record.


Here are takeaways from what could be an NBA Finals preview:

Over the past two games, the Nets have sharpened a potent weapon: their small-ball lineup. Against the Lakers, the Nets' smaller starting lineup of Harden, Irving, Joe Harris, Bruce Brown and Jeff Green aided Brooklyn in building an 11-point halftime lead. The early success of that small lineup forced Lakers coach Frank Vogel to start Markieff Morris over Marc Gasol to begin the second half. It was the same small lineup that helped the Nets climb out of a 12-point deficit (they had been down by as many as 24) against the Phoenix Suns on Tuesday and come back to win. The small lineup has also been consistently used to close out games. With Green at center, the Nets have outscored their opponents by 10.2 points per 100 possessions. When Durant returns, the Nets' small-ball lineup stands to become even more dangerous. -- Malika Andrews

LeBron had to do it all

Coming out of a third-quarter timeout on Thursday, the Staples Center video board showed a compilation of LeBron James highlights, starting with a baby-faced rookie in oversized Cleveland Cavaliers warm-ups, all the way to the bearded 18-year veteran in the Lakers uniform he wears today. The nostalgia reel finished with an oversized graphic, "35K POINTS," commemorating James becoming just the third player in league history to score 35,000 career points, as he joined Kareem Abdul-Jabbar and Karl Malonein that elite group with a free throw in the first half. Artificial crowd noise echoed out of speakers above as the 36-year-old James, playing in Game No. 30 of 30 on the Lakers' schedule this season, toiled against the league's latest superteam.

A week ago, Lakers-Nets had all the makings of one of the games of the year. But with Davis out indefinitely with a strained calf and Achilles tendinosis in his right leg and Durant missing a third straight game with a hamstring injury, the matchup lost a lot of juice. Schroder, the pesky guard the Lakers planned to throw on Irving all night, being a late scratch because of the league's health and safety protocols didn't help things, either.


While the game didn't nearly live up to its hype, James did his part, scoring 32 points, grabbing 8 rebounds, dishing 7 assists and adding a couple of clips to that career highlight reel -- one particularly poetic turnaround rainbow shot over Jeff Green and another soaring one-handed baseline jam.

We'll all have to wait to see if these teams will meet again at full strength in the NBA Finals. In the meantime, James, the game's constant standard for nearly two decades, will be out there, empty seats or not, playing the game he has figured out like few have. -- Dave McMenamin

When the Nets added James Harden to All-Stars Kevin Durant and Kyrie Irving, there was plenty of conversation about Brooklyn's offensive potential with three of the league's best scorers. The Nets' shooting might have gotten overshadowed. After another scorching shooting night (18-of-39, 46%), Brooklyn is now shooting a league-best 42% from 3-point range since Harden's debut on Jan. 16. And the Nets aren't slowing down; they're heating up. Brooklyn's 65 3s over the past three wins -- all played without Durant -- have been surpassed by just two teams over a three-game stretch: the 2018-19 Houston Rockets and this year's Milwaukee Bucks.

The Nets have the luxury of a deep stable of shooters. Since Harden's debut, Brooklyn has five players making better than 40% of their 3s on at least 60 attempts -- all three stars plus role players Joe Harris (whose overall 51% accuracy leads the NBA) and Jeff Green. A sixth player, reserve Tyler Johnson, has hit 42% of his more limited attempts over the past month (13-of-31).

It's going to be hard for the Nets to keep shooting this well. No team in NBA history has managed 42% 3-point shooting over a full schedule with the line at its current distance. (The Charlotte Hornets shot 43% in 1996-97, the last of three seasons in which the 3-point line was temporarily moved in to 22 feet.) But the level of shooting Brooklyn has put around its stars is a key reason this offense has proved so difficult to defend. -- Kevin Pelton 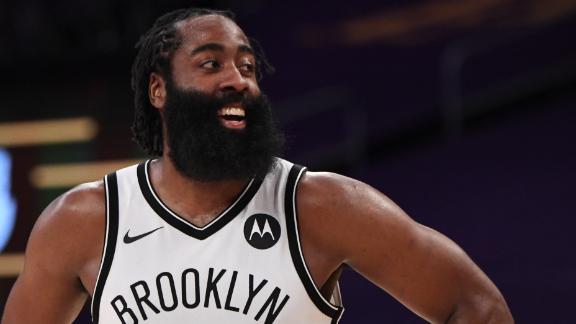