The Dodgers' title drought didn't end at 29 years, but here's how it can at 30 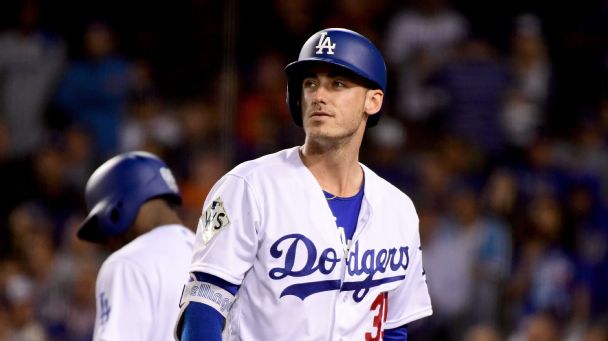 We know the Los Angeles Dodgers can bounce back from adversity. We saw it just a few days ago, when they blew two big leads in losing a 13-12 classic in Game 5 of the World Series, then came right back to beat the Houston Astros' Justin Verlander to force a Game 7.

That the Dodgers lost 5-1 in the series finale was a massive disappointment for a high-profile franchise that hasn't won a title in 29 years. By next October, the Dodgers will be staring at a three-decade-long championship drought.

Nevertheless, that the Dodgers came up one victory short against a great Houston Astros team should not be looked at as a red flag. There is nothing wrong with the Dodgers, nor is there anything that needs to be fixed. As with all teams, there are key decisions to be made this winter. L.A.'s think tank front office will certainly work to get better on the margins.

Even if the Dodgers brought back the exact same team in 2018, they would be a heavy favorite to win a sixth straight National League West title. They would also be viewed as a prime World Series favorite. In fact, depending on which Vegas odds you look at, L.A is either already the favorite, or is a close second in the early betting lines.

The problem for the Dodgers, Astros, Chicago Cubs, New York Yankees and any other team staking claim to a spot on baseball's current elite tier is that they can all make the exact same claim: They aren't going anywhere anytime soon. The four teams named all have dynamic young cores, their best players locked up for the immediate future and all have the resources that come with being in one of the most populous markets in America.

As Cubs president Theo Epstein has often said, the postseason is a crapshoot, and the best you can do is put your team in position to win every year. The Dodgers should be in that position again next year, no matter what happens between now and spring training.

So the Dodgers will set out to once again improve on the margins, as suggested. But know this: There is no formula for building a roster so perfectly suited to baseball's postseason format that it ensures success. We don't know jack about what it takes to win in October. No one does. Think you need three closer-grade, lock-down relievers? That seemed to be the new trend, but the Astros just won a title with zero lock-down relievers.

With all this understood and agreed upon, let's wade into the waters of the offseason and look at ways the Dodgers might maximize their position for their next October go-around.

The top five players in WAR for the 2017 Dodgers are locked up through 2020, either by long-term contract or team control. That core consists of: Corey Seager, Justin Turner, Chris Taylor, Clayton Kershaw and Cody Bellinger. Of those, Taylor will have to prove he's not a flash in the pan, but the other names on that list are the primary reason you can count on more Dodger runs in the seasons to come. Add closer Kenley Jansen to that list.

Darvish is a tough call. Even after his disastrous World Series, he figures to be the top free-agent pitcher in a thin market. That could lead to an onerous external offer that the Dodgers don't want to match. Just how much do you want to invest in a pitcher who not only flopped on baseball's biggest stage but is only marginally more valuable in regular-season terms from some of L.A.'s other internal options?

The Dodgers could let Darvish walk and still roll out the base rotation they had before they traded for him: Kershaw, Alex Wood, Rich Hill, Kenta Maeda and Hyun-Jin Ryu. That's only a jumping off point, given how the Dodgers shuffle starting pitchers. Even so, L.A. still has options like prospects Walker Buehler and Brock Stewart, veteran Brandon McCarthyand possible injury returnees in Scott Kazmir and -- perhaps later in the 2018 season -- recent phenom Julio Urias.

Really, it will come down to price tag and how much the L.A. honchos decide they want to invest in Darvish. If he goes, L.A. might not replace him immediately with another high-price starter but instead would wait until next season to see who pops up on the in-season trade market.

But there's a wild-card factor in the Darvish situation we'll get to at the end of this piece.

Beyond Darvish, the Dodgers have to consider the workload this year for resurgent set-up guy Brandon Morrow, but certainly it would be preferable to bring him back. Watson may be expendable, given the emergence of fellow lefty reliever Tony Cingrani and internal options who should be healthier like Grant Dayton and Luis Avilan.

As for Utley, he looked like an old player during October. However, his oversized presence in the Dodgers clubhouse might convince L.A. to bring him back anyway. Either way, the Dodgers aren't likely to spend big on Utley, nor are they likely to give him anything close to the 353 plate appearances he got this season.

The Dodgers have to make calls on club options they hold on Andre Ethier and Logan Forsythe. Ethier, respected as he is in the clubhouse and in the city, is probably a goner -- his option is for $17.5 million, or the team must pay him a $2.5 million buyout. They'll pay the buyout.

If the Dodgers don't pick up Forsythe's option, they'll be looking at a second base free-agent market headed up by Milwaukee's Neil Walker, with Cincinnati's Zack Cozart a possibility to shift from shortstop. Those options would be even more expensive than simply picking up Forsythe's option. Beyond that, the Dodgers are looking at a repeat of last winter, when they waited out the trade market for second basemen before dealing for Forsythe.

Finally, the Dodgers will have to figure out how to dispatch with Adrian Gonzalez and the $22.4 million left on his deal for 2018. You don't want to bring him back as a reserve, you don't have a position for him and his trade market is probably nil. In the end, the Dodgers are probably looking at eating a hunk of money.

The Dodgers could use more certainty at second base, but as we've covered, their options there aren't overwhelming. If Forsythe doesn't return, maybe you could cover second with some combination of Charlie Culberson, Enrique Hernandez and Chris Taylor, but you'd still need to add a lefty hitter to the mix. (Beyond Utley.)

With Taylor solving the center-field hole, the Dodgers now need to work on adding to their corner outfield mix. Joc Pederson moving around into that rotation now seems like a pretty good option, given his World Series play, but he'll have to show that wasn't a small-sample fluke. He could also be one of L.A.'s more alluring trade chips.

All eyes next spring will be on outfield prospect Alex Verdugo, who could give the Dodgers a third straight Rookie of the Year contender if he can lock down left field, at least against righties. A Verdugo-Taylor-Yasiel Puig base outfield looks pretty sweet.

Still, there is one area, regardless of position, where you'd like to see an upgrade: A high-impact contact hitter.

Hear us out: This is not a knee-jerk reaction to L.A.'s problem with cashing in runners in scoring position during the World Series. The Dodgers ranked 17th in the ratio of their OPS in those spots to their overall OPS. The Dodgers' lineup is all about the secondary skills, but not so much about getting balls in play. That disparity was evident at times in October. If there was one stark difference between the Dodgers and Astros during the World Series, it was that.

If there is one big financial splash the Dodgers should consider this offseason, it's that issue with creating a more versatile lineup. Who fits the bill of what we're talking about? Here's a few names of players who might be worth targeting, whether it's with free-agent cash or with a splashy trade offer: Marcell Ozuna, Jose Abreu (which would put Bellinger in the outfield, so it's not a great fit) and Cozart.

Beyond that, there is one splash the Dodgers could make that might only be a indirectly a big financial commitment: The successful wooing of possible Japanese free agent Shohei Otani.

The Dodgers can only offer Otani a $300,000 bonus because of their current restrictions under the rules governing each team's international spending pool. They are one of 12 teams so restricted this year. However, no one can blow away the market with an offer because of the new limits imposed by the most recent CBA. On top of that, insofar as we know what the somewhat mysterious Otani will prioritize, it's said that money is a side issue.

What the Dodgers could offer is a great team on the field, a healthy and diverse clubhouse culture and the city of Los Angeles -- which has the largest Japanese-American population in the continental United States. The Dodgers also have one Japanese player who seems perfectly happy in Maeda.

And then there is Darvish, who also says he likes the Dodgers, wants to return and has worked out with Otani in Japan in the past. How much could re-signing Darvish help sway Otani's decision? Right now, that's impossible to say. But if it emerges as a factor, that could make Darvish's price tag more palatable.

If the Dodgers were to land Otani, part of the pitch will likely be to allow him to function as a two-way player. That's surely going to be part of other teams' recruiting and L.A. may be forced to make that promise. That's not a bad thing, if Otani proves to be as capable of it as his numbers in Japan suggest.

No team leverages versatility more than the Dodgers. You could see Otani possibly rotating from left field to right to first base, pinch-hitting and either starting in the rotation, serving as a multi-inning reliever or even emerging as another lights-out set-up guy for Jansen.

The good thing about the Dodgers' situation is that they can be as creative as they want to be. They don't have to make any kind of splash unless they find the one they want to make. They don't pare down payroll, because they have so many good, cost-controlled players that salary expense is decreasing in an organic fashion.

Next season, the Dodgers will be back in the mix. But do they make one big move this winter, or several smaller ones? Do they stand pat? With the club at a high point in its history, we know this: L.A. will be dealing from a position of strength.
Report a correction or typo
Related topics:
sportsespnmarketmlbtradelafree agencyotanilos angeles dodgerssigning
Copyright © 2022 ESPN Internet Ventures. All rights reserved.
TOP STORIES
Villanueva's former top aide admits belonging to alleged deputy gang
UPS driver, 24, collapses, dies in SoCal heat
Uvalde school police chief resigns from city council
New Glassell Park restaurant at center of gentrification debate
14 suspects grab and run out with merchandise from Century City mall
California bid to create legal drug injection sites advances
Flight delays ease up Saturday during chaotic travel weekend
Show More
Fewer young Americans want to serve, due to obesity fewer qualifies
4th of July fireworks in Southern California: Where to watch
Disneyland replacing Splash Mountain with Tiana's Bayou Adventure
Teen girl speaks out after surviving shark attack at Florida beach
Experts set expectations about 'vaccine efficacy'
More TOP STORIES News