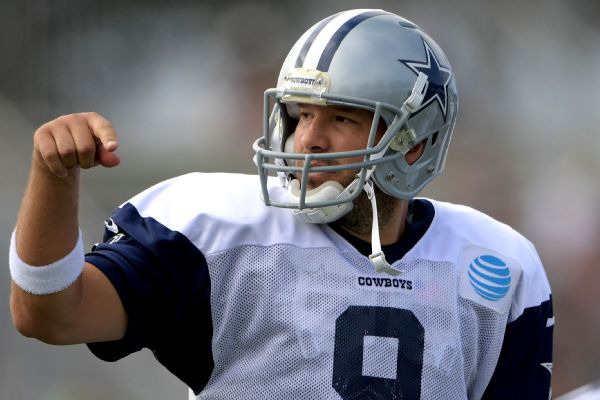 When Dallas Cowboys quarterback Tony Romo will next be in uniform and available on game day has moved from a medical decision to a coaching decision, sources told ESPN on Wednesday.

"Any time a player comes back from an injury, you have feedback from the player as to how he's doing," said Cowboys coach Jason Garrett, who would not confirm that the decision was up to the coaches. "You watch him as a coach, you see how he's doing. The trainers watch him and you come up with a decision as to what his status is in the game, and we'll do that with 10 guys at practice today."

Romo has been recovering since suffering a compression fracture in his back during a preseason game in Seattle. Depending on how he responds to more extensive work in practices this week, Romo could be in uniform for the first time this season when the Cowboys visit thePittsburgh Steelerson Sunday, barring any physical setback.

"He's champing at the bit," Garrett said Wednesday. "But you know, we'll watch him today at practice and see how he does."

Romo was listed as a full participant in Wednesday's practice for the first time this seasons, which could be a sign that he is trending toward being active on Sunday. He was listed as limited for two practices last week.

A final determination seems unlikely until late in the week.

"That will be a coaching decision,'' a source told ESPN.

Romo has remained on the active roster and has been with the team on the sideline each week this season, but he has not dressed for a game while rookie Dak Prescott has led the Cowboys to an NFC-best 7-1 record. The Cowboys have not publicly committed to having Prescott continue as the starter when Romo is available, but there have been strong indications that is the plan.

Romo has thrown just 121 regular-season passes since the end of the 2014 season and hasn't played a regular-season game since Thanksgiving Day last year.

"He's been throwing the ball well. He had two good days of practice last week," Garrett said Wednesday. "...The last couple of weeks have been really good for him."

Because of Prescott's performance and the team's record, Jones has said the Cowboys would not be forced to have Romo return prematurely and risk reinjury -- as has happened in that past -- and that they're in position to ensure he is fully recovered from an injury unrelated to his many other back problems.