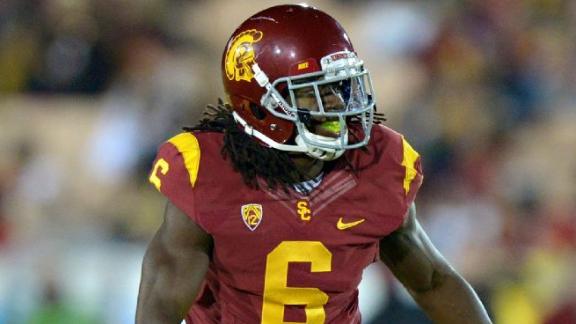 LOS ANGELES -- USC football coach Steve Sarkisian said the school's investigation into the authenticity of Josh Shaw's story about saving his nephew from potentially drowning is in a "holding pattern" and is now being handled by campus authorities.

"It's pretty clear that there's quite a few conflicting stories out there," Sarkisian said after practice on Wednesday. "Any information we have been provided up until this point we have pushed along to campus authorities. We're really going to let it play out in their hands up until this point and quite honestly we're in somewhat of a holding pattern. That's where we are at. Anything I do get that I can provide you guys with, I will, believe me, I will."

When Sarkisian was asked specifically what campus authorities were handling the investigation he said, "everything above me."

"In this day and age of college football and head coaches' responsibilities, I'd be foolish not to push everything up the ladder," Sarkisian said. "I think we learned that a couple years ago with a couple other high-profile coaches, so everything I've ever done when things come across my desk is to push them to campus authorities and let them do their due diligence.

"When things come back to me, then I can comment on them. Until then, I don't really have much to say on it."

Shaw said he suffered a pair of high ankle sprains Saturday night after jumping from the second story of an apartment complex to save his 7-year-old nephew, who was struggling in the pool. Shaw said his nephew did not know how to swim.

Sarkisian said he did not know how long the investigation would last and that he didn't want it to distract the team from their season opener at home on Saturday against Fresno State.

"We haven't spent much time on it at all quite honestly," Sarkisian said. "We've put in too much work over the last nine months to let an hour or two of social media and Internet reports distract us from being a great football team. If it does, then that's not a great sign for us moving forward. We have to be strong enough to handle adversity whether it's on the football field or off the field and continue to hang together and be together."

After Wednesday's practice, only two players -- Leonard Williams and Hayes Pullard -- were made available to the media and both players said they had not seen or spoken to Shaw since the story broke and have not tried to reach out to him. Team leaders held a short meeting with Sarkisian on the field after practice about dealing with the situation.

"None of the players really know about the Josh Shaw situation," Williams said. "[Sarkisian] basically told us to stay focused and don't let it affect us on Saturday. We've had to deal with so much more adversity the past years even before this. Our team has adjusted to playing through adversity."

Williams and Pullard said they had no reason not to believe Shaw's story but also said they felt no reason to reach out to him and discover for themselves what really happened the night he was injured.

"I really don't know," Pullard said when asked why neither he nor any of the teammates he has talked to have reached out to Shaw. "He and Sark had a meeting together and we haven't seen him since that day. We're just leaving it to Coach Sark, he's the head man and that's who we answer to."

Sarkisian addressed reporters for only five minutes after practice and spent only two minutes addressing the Shaw situation before only taking football questions.

"My main focus is on going out and playing a great football game Saturday," Sarkisian said. "As much as we have the situation with Josh, I have another 104 football players in that locker room that I have to get prepared to play so that's been the main focus that I've had."

Lt. Andy Neiman of the Los Angeles Police Department also said Tuesday afternoon that a man named Joshua Shaw was mentioned -- but not as a suspect -- in a report involving a Saturday night break-in at a downtown apartment building.

A transfer from Florida, Shaw has six interceptions in two seasons at USC. He was voted a team captain last weekend and is expected to be a major part of the Trojans' secondary after starting all 14 games in 2013.