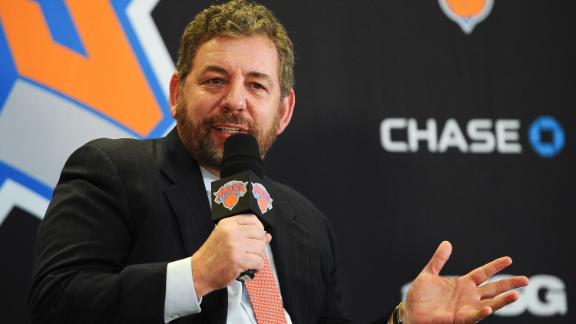 Inspired by Dolan's email to a fan in which the Knicks owner told him to go root for the rival Brooklyn Nets, Jason Koeppel and his brother Jared, along with friends Greg Kohler and Dan Filowitz, have launched Knicks4Sale.com, a detailed website that calls for Dolan to sell the team.

The campaign, which also features a Twitter and a Facebook account, hopes to raise $20,000 in donations to pay for a billboard on 30th Street and Seventh Avenue near Madison Square Garden.

"It was the 'Idzik news conference moment.' That's what we called it when we decided that management and ownership had gone too far and it was time for the fans to do something," Jason Koeppel, a self-described die-hard fan of the Jets and Knicks from Teaneck, New Jersey, told ESPNNewYork.com via phone Monday night.

"This email that he had the nerve to send to one of his fans was the moment. We talked last night -- the four of us -- and just said, you know what, we've had enough and we've gotta do something."

"I've been a Knick fan my whole life, and the past 15 years -- except for that one season where we won one playoff series -- have just been a nightmare," Koeppel continued. "We've been patient, and the cost of going to games has just skyrocketed to the point of being completely out of control, so we don't attend as many games anymore, but we definitely watch on TV, and it's just one terrible season after the other.

"We're sick of having Dolan around. We're sick of his meddling. He's an embarrassment. And it's embarrassing to us to read the email that he sent to a fan, so we just felt like it was time to embarrass him."

The slogan on that billboard will be determined by a fan vote. Assuming enough money is raised for it to be put up, the billboard would be up from the middle of March to the middle of April.

"It's gonna say something to the effect of 'Knicks 4 Sale: Competent owner needed. Inquire within,'" Koeppel said. "But we're gonna look to the creativity of the donors to help us in that process."

Last season, Koeppel and his friends started firejohnidzik.com. They also raised money for multiple billboards -- on highways and via airplane -- calling for Jets owner Woody Johnson to make a change. Idzik was eventually fired following the team's 4-12 season.

"Just like we didn't think that Woody Johnson was gonna go outside Route 3 [near MetLife Stadium] and look at a billboard and fire his general manager, we certainly don't think that James Dolan is gonna look at a billboard on 30th and Seventh and say, 'Hey, maybe you know what? I should sell the Knicks,'" Koeppel said. "But the whole point of this is just to voice displeasure and maybe embarrass him to the point of realizing that what he's doing the last 15 years isn't working and it's time to step away."

Dolan hired Phil Jackson in March and rookie coach Derek Fisher in June to help rebuild the franchise. Dolan and Jackson said Jackson would have full autonomy as president after the 11-time NBA champion received a five-year, $60 million contract. Fisher was signed to a five-year, $25 million deal.

The Knicks (10-42) re-signed Carmelo Anthony to a five-year, $124 million max deal over the summer and, barring a stunning turnaround, will have a lottery pick in the first round of the NBA draft plus around $30 million to spend in free agency.

But Jackson recently told The New York Times that "so far, my experiment has fell flat on its face."

Dolan Tells Knicks Fan To Cheer For Nets
New York Knicks owner James Dolan tells a Knicks fan in an email to cheer for the Brooklyn Nets instead of the Knicks.